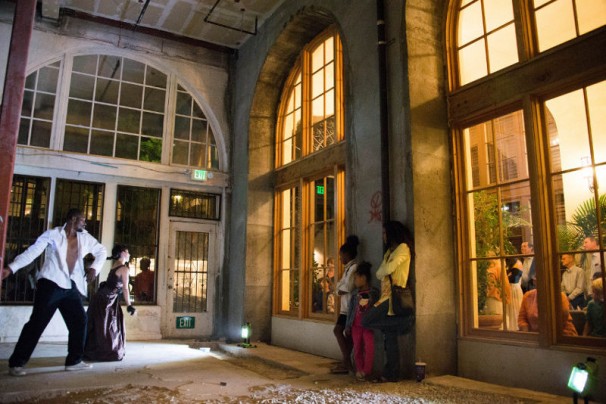 “It’s site-specific work, so feel free to walk around so you can see,” offered choreographer Heidi Duckler at the outset of Saturday night’s “Dancing at Dunbar” performance by Heidi Duckler Dance Theatre. In doing so, she encouraged her audience to remain active during the site-driven dance event. A full spectrum of Duckler fans and curiosity-seekers gathered on the splendid, temperature-perfect evening at the historic Dunbar Hotel on Central Avenue in South Los Angeles for the show.

But mostly people don’t — mosey around. Mostly they stick in one place, timid, perhaps a bit intimidated, cautious they might get pulled into the action in ways they did not sign on for. The worst example of this happened soon after the photo above was snapped. Inadvertently or not, dancer Wilfried Souly, in his performance, kicked up a huge cloud of dust that rained all over a lovely family … a mother and two daughters … politely leaning against the wall, on the sidelines, to observe.

Watching this was not pleasant. Okay, adults. But kids?! It hearkened the several-day recovery period after spectating at Duckler’s recent performance event at the spooky Linda Vista Hospital in Boyle Heights, a building sorely under renovation, much of it a distressed bombed out shell, part of it a truly filthy construction site. For days after the performance, we coughed and had grit and dust in nose, ears, throat and hair. More disturbing must have been the effect on the dancers, particularly our favorite Duckler gal Marissa Labog, who ventured through a long solo in the structure’s basement, in dim lighting made even more invisible by red clouds of dust. 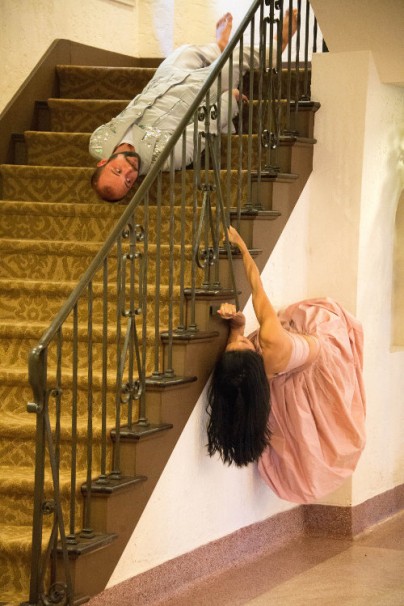 PausePlayPlayPrev|Next
The Dunbar was somewhat better. The performance area was mostly finished in its renovation, with the exception of the closed-off room pictured above. But let’s try to be less cranky: In staging her work at the Dunbar, Duckler helped us visit a hugely alluring and historic hotel, full of aesthetic value beyond its roster of famous former residents.

Indeed, the Dunbar is an elegant building, its ground floor (we only saw this) a series of connecting chambers of Spanish Colonial Revival style decorated by wrought-iron balustrades, restored murals, high ceilings with charming chandeliers and a swell working fountain burbling at the center of an enclosed patio.

The likes of Duke Ellington, Billie Holliday, Count Basie and Cab Calloway found in the Dunbar a welcome respite at the end of long night’s booking at the clubs of the Sunset Strip, or at the Coconut Grove of the Ambassador Hotel, where they (and their bands) often traipsed in and out through the kitchen. Indeed, victims of racist policies in our Southern (California) city, they were barred from spending the night.

The Dunbar wasn’t a jazz club. It was a hotel; however, in the basement of the building next door roosted Club Alabam, where late-night jam sessions took place.

The hotel, which fell into massive disrepair, has been lovingly restored as a low-income housing facility, a righteous architectural re-use.

And the fun, if somewhat meandering, choreography for two couples who bent and shaped their bodies in and around property’s nooks and crannies, literally crawling its walls, was intended to highlight architectural elements. What goes missing in Duckler’s house style (the vivacious and well-choreographed “Cleopatra, CEO” Duckler’s chef d’ouevre, an exception) are key elements that lend dance diversity and dimension: rhythm, repetition, patterns, phrasing, dynamics, all modulating tools, dance’s very architectural building-blocks (I am in deep study, now, of Busby Berkeley, a master of this idea, and in some of her inventive spark, Duckler is his kindred spirit.) Saturday’s production did build to a very strong conclusion when an excellent singer, Tatiana Williams, warbled, a capella, “Why the Caged Bird Sings” and Teresa Barelo and her partner, Souly, linked up for a solemn march to the street. Other than that bluesy moment, the musical accompaniment — some of it high-end muzak — and Duckler’s dance duets did not do enough to evoke the spirited jazz ghosts wafting ’round the Dunbar chambers.

Those folk were left to speak for themselves. And through their recordings, they always will.