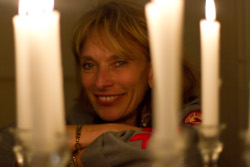 In her most recent escapade, the skyscraper-topping “Cleopatra CEO,” Heidi Duckler ramped up her audience with an heady dance cocktail mixing corporate and sexual politics. This past weekend, the pied-piper choreographer, having transformed us into alpha men, led us to a forested glen in Elysian Park, one mile outside downtown Los Angeles. There on the grounds of the historic Barlow Respiratory Hospital, she and her sturdy dance troupe advised us to “Catch Your Breath.”

Hey, thanks — now you tell us! 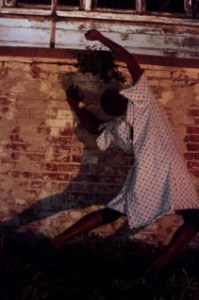 The devilish Duckler, who has stuck for 25 years to her mission of using dance as a prism through which to explore our city, offered a fine new chapter with her fun, skilled, and even profound site-specific work.

Beyond providing an amazing visual experience for her receptive audience, Duckler, in “Catch,” transformed a basically troubling venue — a place of recuperation from wretched disease, a place where many patients die — into a thought-provoking, even joyous, shared adventure. The Barlow (and its ilk), a specialized hospital and convalescence home tucked in the shadow of Dodger Stadium, played a critical role in L.A.’s development. At the turn of the century Americans flocked from across the nation just to breathe fresh air. Back then the city had little more to offer than that — and orange groves. (Some contend we still specialize in hot air.)

Amidst the Barlow campus’s low-rise, period architecture that gives form to human brokenness and dilapidation, Duckler made clever choices. She wove together nine scenarios, each one a small drama, each lit and soundscaped with skill that improves with the dance maker’s every outing. 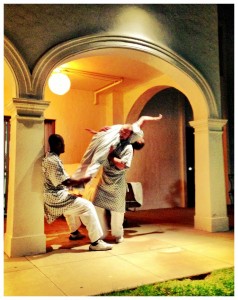 An opening lecture put the sensitive subject right up front. Two rows of chest x-rays hung on view in the cool night air (to get around viewers toted little flashlights under the strict supervision of Nurse Ratched lookalikes). Liesle Euler, white spectacles perched on her nose, delivered a danced explanation of lung disease. Then followed (for my group, there were two routes) a heart-rending duet performed by Duckler’s surrogate, the lithe Marissa Labog and her partner Joe Schenck. The duo, garbed in white (the evening’s predominant color), evoked the hospital’s early patients, gasping and choking, stricken by asthma, tb, emphysema or other respiratory ailments.

A modicum of comic relief came in the next chapter, in Barlow’s high-ceiling’ed library, where three otherwise genteel Victorian ladies came under the attack of hiccups. After futile attempts to maintain decorum by smothering the rude body burps, they turned on each other. Very well conceived by Duckler. Male patients, dressed in blue orderly uniforms, climbed a steep set of stairs goosed by the sound of a tuba. Though not a “wind” instrument, the tubu-lar belches confirmed the power of breath. The joke deepened, indeed saddened, when Willliam Roper led the audience on a New Orleans-style funeral march while belching the woeful dirge, “St. James Infirmary.” 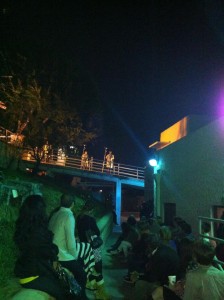 Duckler’s most ambitious and memorable scenario took place around a faded wooden shack, a house on haunted hill itself in deep decline (do you like your architecture “distressed”?). Dancers, ghostly in hospital gowns, collapsed and flailed. Then, like little kids, they hopped onto wheeled IV poles for rides down an inclined ramp. And on and on it piled, one rich mise-en-scene after another; one in which singer Jasmine Orpilla belted while video projections of patients in iron lungs, then a patio-veranda extravaganza choreographed by Duckler for wheelchairs and bed sheets, and in the event topper (far from the evening’s strongest choreography, but an upbeat finale), a new-age deep breathing lesson with tabla accompaniment by Chris Garcia.

We wish Duckler would sharpen her surgical knife in sculpting her ideas; run-on choreography weakens the impact. Also the “tour guide” paradigm interrupts the feeling of an art happening; we wonder if there are alternatives. 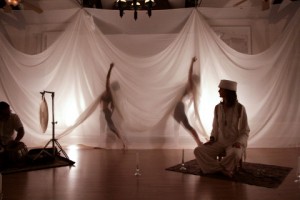 But this is nitpicking. For her courageous consideration of difficult, even taboo, subjects of disease and death; for her sensitive use of healthy dancers to embody the aged and unwell; for her continuing forays through our city’s social and architectural history, a huge nod of respect to choreographer Heidi Duckler. It’s local, it’s Los Angeles, it’s indigenous, and it matters.