There’s quite a bit of ‘competition’ out there. Los Angeles has performing arts centers in abundance–in Beverly Hills, Santa Monica, Long Beach, Costa Mesa, Northridge, and Malibu. But there’s only one mothership, and that is the Los Angeles Music Center, a cultural anchor in our city since 1964. Home to the Dorothy Chandler Pavilion, Ahmanson Theatre, Mark Taper Forum, and Walt Disney Concert Hall, ya’d think this precious jewel may have lost luster after all these years.

No such thing. A major redo of the Center’s significant public space has given rebirth to a people’s plaza, where Angelenos brave traffic and scant downtown street parking to kick it, joyfully, in the cool night air. They also shake it, motor it, and jam it as part of the Music Center’s nervy and fun DANCE DTLA evenings. The now-called Jerry Moss Plaza stands where the solemn Jacques Lipshitz sculptural fountain once splashed and spurted. Paved with a wonderful wooden dance floor, it attracts dancers by the droves — and every shape, size, color, age, and skill level jumped onto it Friday June 24 to buddy up with neighbors and dance the night away to the crisp salsa tunes, courtesy of a handsome deejay. The place was packed. Some watched, but most danced — and just look at the fun in these photos. There were queues for coffee, queues for cokes, queues for beer and wine, people came for the night! 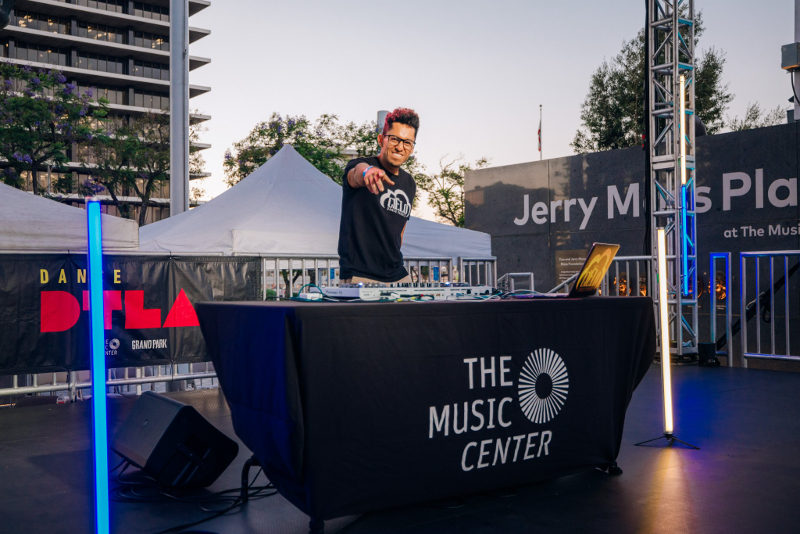 We also enjoyed absolutely amazing Swing dancing that was part of the ticket (a kind of outdoors Part Two of the evening, a perfect offering post-pandemic) as part of the joyous performance of SW!NG at the Ahmanson Theater over the weekend.

A big artsmeme photo credit for these fabulous shots goes to Will Yang, aka @willteeyang, for The Music Center.