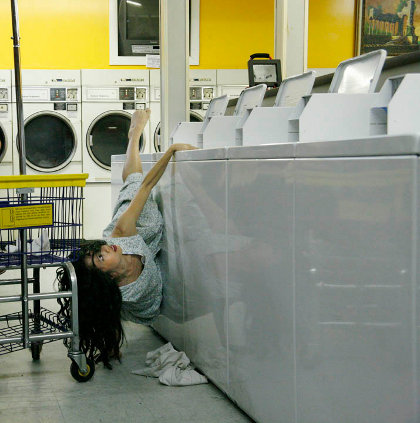 The Echo Park lavanderia (“SpinCycle”) where choreographer Heidi Duckler is reprising her 1988 site-specific work “Laundromatinee” stands next door to a Los Angeles bagel factory. Yeasty baking odors waft into the laundromat where her whimsical dance unrolls.

We’re in the inner city. That makes sense because Duckler, a long-time contributor to the local dance scene, is an urbanite.

We assume Duckler loves cities because, as the creative force behind Collage Dance Theatre, she’s been dragging her audience around L.A. for 25 years. She demands that they pay attention to their environment, whether the Los Angeles River, Ambassador Hotel, Los Angeles Police Academy, or (upcoming) L.A.’s iconic City Hall.

“Laundromatinee,” which the National Endowment for the Arts just designated an “American Masterpiece” — a huge honor for Duckler — is Duckler’s trademark for good reason. It’s a sweetly amusing, adorably choreographed (open-and-close that dryer door, 5-6-7-8 …) foray for eight housedress-clad dancers (two are men) who bond with the washeria’s paraphernalia. It resembles using a coin laundromat in that the show’s cycle runs 30 minutes only. 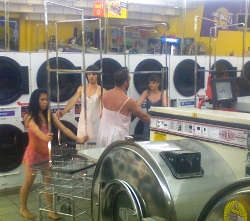 The beleagured hausfraus strip to their skivvies and morph into Stepford Wives; they wipe, iron, fold, clean, and spray. They handle clothes, towels, schmattes; it’s the laundry for gawdsakes. They mount washers, insert themselves into dryers (this bit is just fantastic), and cruise the limited space in laundry carts.

Duckler is a veteran stager of “Laundromatinee” even in NYC, where, she says, the laundromat “was tiny,” as though it were shocking that a city could lack L.A.’s boundless square footage. Noting that the Echo Park SpinCycle is better, she says: “This is a pretty large laundromat,” then adding on reflection, “although it doesn’t have a lot of top loaders.”