In a curtain talk with costume historian Deborah Nadoolman-Landis prior to a TCM Fest opening-night screening of Cleopatra, Bob Mackie described an early influence. It was designer Travis Banton’s amazing costumes for Claudette Colbert in Cecil B. DeMille’s at-turns-camp, at-turns-sumptuous Roman romp.

“I was thirteen, I lived in Inglewood, there were three movie theaters there. An old revival house was showing Cleopatra. Claudette was playing this woman [whose dress] had a strap this way, a strap that way. I saw things I never saw in my life. 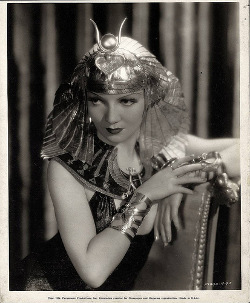 “In the fifties, you thought all women’s breasts go outward to a point. Here, you see jiggle.

“Nothing hangs over the edge. the body is smooth and lovely.

“But Cleopatra’s handmaidens look period. They were from the Burlesque downtown.”

Nadoolman-Landis noted that although the film is shot in black and white, the costumes in Cleopatra were created in color. She said, “We have one dress that we’re putting in an upcoming display of Hollywood costume in London. It’s from the scene where Colbert is having her make-up done. It’s a heavy satin dress; it looks white, but it’s mint green.”

Mackie said that color was necessary for the actresses psychologically, even though it did not read in the final film. 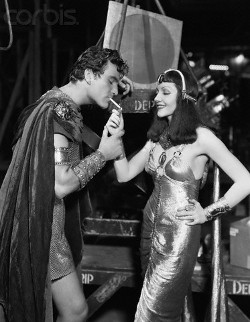 “I worked in black-and-white television starting in 1963 with the Judy Garland show.”

Noodleman-Landis described Paramount’s gifted chief designer who was reknowned for dressing Mae West, Carole Lombard, Miriam Hopkins, and Marlene Dietrich: “His genius was apparent. People haven’t heard about him. If anyone wants to do a biography of him, now’s the time.”

Said Mackie, “When I first started designing for Cher, she didn’t want to look like anyone else. She wasn’t Sandra Dee. She was lean and long. She was a vamp.

“Recently, I went back and looked at Travis Banton’s fabulous Roman gowns for Cleopatra. And I thought, ‘I really knocked that movie off!'”

Travis Banton is a popular subject at arts·meme. Read more: