We just loved Cecil B. DeMille’s Cleopatra (1934)  — a movie that burns at high voltage for one hundred entertaining minutes. It looked all the better projected onto the Egyptian Theater’s humongous screen.

Scott Eyman, author of the new DeMille biography, “Empire of Dreams,” was on hand to banter about the film with critic Leonard Maltin.

DeMille shot the Paramount feature “with dispatch,” said Eyman. “It was made economically in seven weeks,” he said, adding, “The barge sequence, in which Cleopatra seduces Mark Antony, was shot in two weeks.” 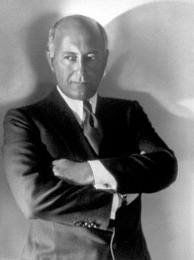 “[The scene] is one massive camera pullback, synchronizing camera movement with barge ephemera,” Eyman said in describing the mesmerizing effect DeMille achieves with scores of extras dragging the Nile river boat in rhythmic oarsmanship. The scene’s swelling music climaxes in one single thundering crash of a kettle drum.

The censor must have closed one ear not to mention one eye on that one.

“C.B. was a sensual man. He was intoxicated all his life,” noted Eyman.

He said DeMille, “was a contradictory man who led a complex and fascinating life. He embodied disparate poles. He was a religious man and saw his films as ministry. But he also knew that to have an effect, you had to put butts in seats. He was a commercial animal. He knew it was show business; there was the show, and there was the business. He saw no contradiction in this.”

“[In the silent era] DeMille made vital dramas about the complexities of marriage,” said Eyman. “Only in the mid-’30s did he commit to epic scale and the operatic grandeur that became a DeMille film. And he accepted this [epic] branding of himself.”

“DeMille’s detractors refuse to recognize his abilities,” said his biographer. “Cleopatra” is a vibrant, extremely well-made film that displays a very modern use of cinema [for its time].”

Eyman’s very well received tome is the by-product of five years of research. 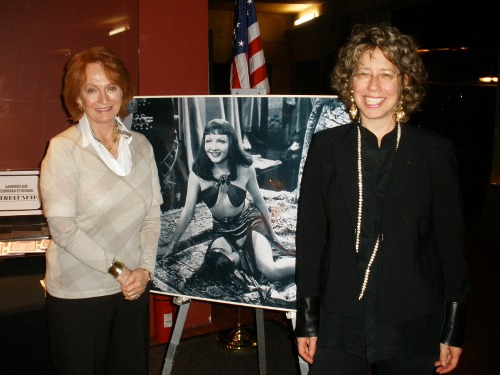 Pictured above, at left, is the grandaughter of Cecil B. DeMille, Mrs. Cecilia DeMille Presley, who hosted the event. She was raised by her grandparents. In the middle, perches Claudette Colbert, Queen of the Nile, garbed in one of 16 scanty get-ups Paramount Studios costume genius Travis Banton created for her.

arts·meme’s Debra Levine stands at right. Banton did not dress her.