Misha acts at Broad Stage, then Tavis Smiley chats him up 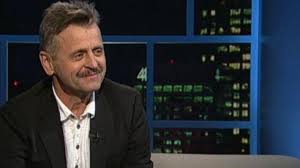 The 80-minute dance-drama, an adaptation of a Russian short story by Ivan Bunin, opened Wednesday night in Santa Monica.

It is touching to see this great stage artist in a vehicle that suits him so well. His silken physical presence lends weight to a play in search of some — steeped though it is in a dark, sombre setting of Europe of the 1930s. A somewhat flimsy, primarily visual vignette, “In Paris” ‘s tone poem revolves around a love story, more of a fantasy encounter. An absurd atmosphere prevails as Platonovich banters in a gentle voice with the excellent actress Anna Sinyakina, who plays the waitress Olga. 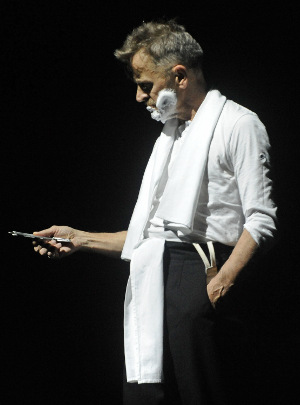 Charming wordplay bobbles between the server and her client; for example, concerning the older gentleman’s soup selection — pickled cucumber, borscht, or cabbage.

One of the evening’s many striking tableaux had the Russian planted far downstage on the tilted, rotating plate of a stage. Preparing for his rendezvous with Olga (a movie date, how perfect), Nickolai lathers shaving cream on to his gaunt cheekbones, then performs a punctilious toilette. The famed Baryshnikov legs get good exposure, but more so, as he dresses, we’re privy to a highly personal ritual — a tightly wound gentleman fastening the myriad buttons that hold him together. For, in the play, Misha plays a repressed military man, a characterization he admits was inspired by the memory of his real-life father.

At evening’s end, I caught a broadcast of PBS talk-show host Tavis Smiley in conversation with Misha, in which the former ballet dancer remembers his father, and his Latvian childhood. Since most Americans only know Baryshnikov as a perfect prince who virtually floated into our midst, this inkling of his real story fascinates.

A wonderful capper to “In Paris.”