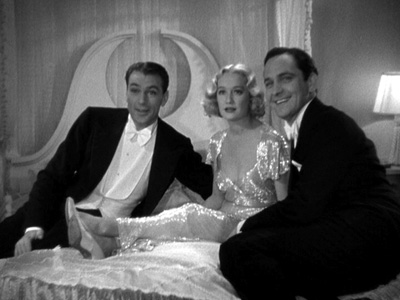 Last weekend, we levitated in pleasure under the spell of “Design for Living“ (1933), the sophisticated German-born film director’s version of the Noel Coward play.

Two Americans sharing a flat in Paris, playwright Tom Chambers (Frederic March) and painter George Curtis (Gary Cooper, gorgeous), fall for free-spirited Gilda Farrell (Miriam Hopkins, running the show). She can’t make up her mind which she prefers, and proposes a “gentleman’s agreement”: She will move in with them, but they will never have sex. 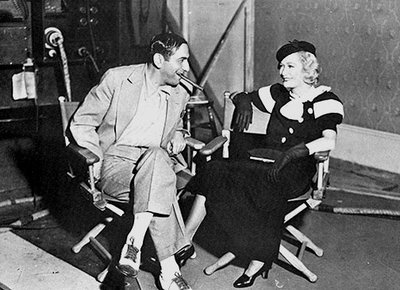 Hopkins, shown in the photo at right kibbitzing with Lubitsch, forms the fulcrum of a love triangle that would be the envy of any woman. She swaps between Cooper and March, jangling the two men like charms from her bracelet.

“Travis was very slick and personable. He knew how to talk to the stars — how to make them feel absolutely beautiful in his clothes. I learned everything from him…I learned more from Travis Banton by watching him dress Carole Lombard than anything I’ve ever done. I spent every possible moment staying glued to Travis, trailing him everywhere like a puppy. After all, he was the best designer, bar none, in the world. And he taught me everything I knew about designing.”

The American Comedies of Ernst Lubitsch | LACMA | through July