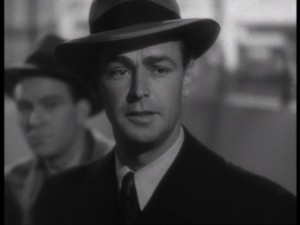 “He got pegged as being short, 5’2″. But he was actually 5’6″ or 5’7″,” said actor/producer David Ladd, himself a very tall man and one of actor Alan Ladd‘s four offspring to work in the film industry.

Ladd spoke about his father following the absolutely fantastic screening of “The Blue Dahlia” at the Academy’s summer film noir series curated by Randy Haberkamp. 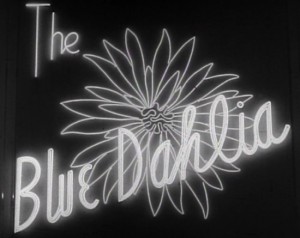 Angeles crime whodunit, dating from 1946, has at its gritty core a tough-guy screenplay by crime writer Raymond Chandler. It was Chandler’s only original screenplay, his follow-up to a successful collaboration with Billy Wilder on “Double Indemnity.” There’s urban legend about Chandler finishing the script at home on a bruising, round-the-clock bender, dispatching pages to the studio by courier.

Watching “Dahlia’s” close-knit ensemble of character actors hurl Chandler’s hard-boiled lines at each other gives tingling pleasure. The director burns time and space around the words so you can take them in. 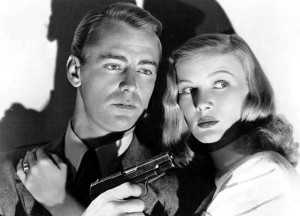 “Dahlia” is one of seven films Ladd made with co-star Veronica Lake. Ladd, junior, noted: “My parents loved each other. Veronica and my Dad did not have a real relationship outside their films,” adding, “One of his dearest friends, a life long friend, was [actor] William Bendix [who plays Buzz, a key role in “Dahlia.”].”

“”Shane,” of course, was my father’s favorite film. But “The Great Gatsby,” he was most proud of. It was not successful. They [Paramount] knew they would re-do it and so they held it back [from distribution.] Howard DeSilva [also in “The Blue Dahlia”] was in it. It was set in the 1940s.”

“My father came from humble beginnings. His family came to California during the Depression; they were in Oklahoma for awhile. It was like “The Grapes of Wrath.” They lived in a tent city in Pasadena. He was malnourished. [Initially] he failed as an actor; they told him he was too short and too blond. Then he worked as a grip. So when he finally became a star, it was hard for him to believe. In Hollywood, the dreams are hard to hold onto. It’s hard to sustain.”

“When he eventually left Paramount, it was for financial gain, but it was like leaving his family.”

Alan Ladd died young, at age 51. Booze and pills were involved: “He was a tremendous athlete, he was a great diver and swimmer. But he didn’t take care of himself like people do today. He had depression problems. He had a tough time,” said his son David, with compassion.

5 thoughts on “As a dad, Alan Ladd walked tall”