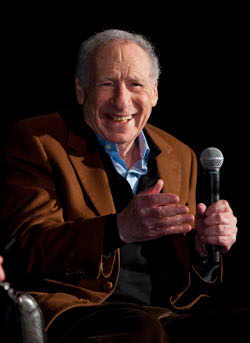 Asked by Brown what spurred his ribald take-off of the James Whale horror flick, Brooks recalled:

“They were playing Frankenstein at the Commodore Theater in Williamsburg [Brooklyn]. My mother took me.

“Now we called the monster ‘Frankenstein.’ You know, the big guy who scared the shit out of us?

“He [not the scientist] was Frankenstein.

“Later that night, when she tucked me in bed, I told my mother to close the window. She said to me, ‘We’re on the fifth floor of a tenement. It’s hot. And air conditioning hasn’t been invented yet.’ 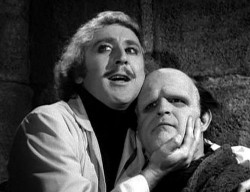 “I said to her, ‘Frankenstein’s gonna come and bite me and kill me.’ 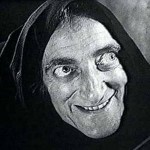 “So I let her open the window.”

Brooks went on to recount how his good pal, Gene Wilder, had the initial idea for the flick, how they developed it together, and how Alan Ladd Jr. at Twentieth Century Fox backed the film’s $2 million budget.

“Young Frankenstein” rocked the walls of the Egyptian tonight. Of all the ensemble players in the film — and they are all so hilarious — Marty Feldman (“Damn your eyes!” “Too late!”) gets my vote as the funniest.

One comment on “TCM Fest: “Frankenstein’s gonna bite me and kill me,” said 5-year-old Mel Brooks”