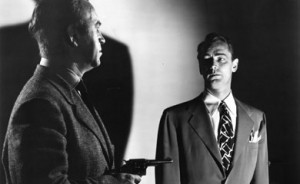 Fourteen years ago, the American Cinematheque launched its inaugural festival of film noir. Back in 1999 it was called “Side Streets and Back Alleys: A Festival of Film Noir,” and it featured dozens of forgotten films, retrieved from critical exile, that have since been recognized as unjustly neglected genre gems, with many returned to circulation via DVD.

This year the the festival returns to the Egyptian Theatre, where it all began, with a super lineup of films ranging from pre-Code proto-noir (OKAY, AMERICA and AFRAID TO TALK) to perennial festival favorites (T-MEN, THE WINDOW, CAGED) to rediscovered rarities (NAKED ALIBI, SHIELD FOR MURDER, JOHNNY ALLEGRO, MANHANDLED, THREE STRANGERS, Alan Ladd’s 1949 THE GREAT GATSBY).

I’m all for F. Scott Fitzgerald, so I’ll go to the opening night Alan Ladd double-bill,