Who knew? . . . when the American film establishment was hyping Anthony Minghella’s The Talented Mr. Ripley (1999), that French director Rene Clement had filmed a superior version of Patricia Highsmith’s disturbing novel on location in Italy in 1960? And that Minghella’s version was a remake?

Like, who knew that? I didn’t. arts•meme can’t know everything, guys! That’s why we have Ian Birnie, the talented cineaste who heads up the film program at our county museum, LACMA. 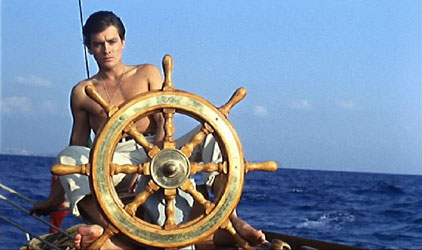 The young Alain Delon, at left, stars as the creepy, amoral, identity thief Tom Ripley — a perfectly frightening vacuous cipher. Film provides a color-drenched travelogue of Italy, so if you want to travel in time back to Naples circa 1960, see this film.

The heartless murder sequence filmed on a sailboat in the choppy Mediterranean Sea, a thrilling action sequence, gives new meaning to the expression “motion picture.” I got sea sick. 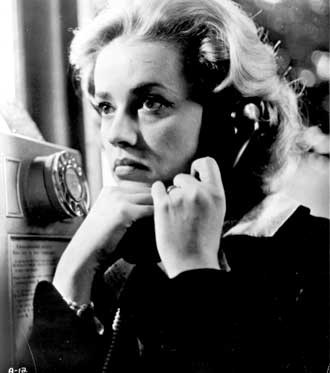 Of Jeanne Moreau’s two diva-contemporaries, Simone Signoret and Catherine Deneuve, my favorite is Moreau (click on her). Moreau means business, but she’s not all pouts and frowns — unlike her successor, Isabelle Huppert, who is the queen of the pouty frown.