Liza with a Z at “Last Remaining Seats” 1 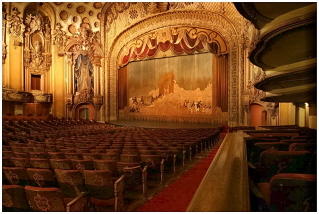 Nothing in our city compares to it as a community event. (Lakers fans may disagree!)

To sit in the faded remains of downtown’s glamorous vintage theaters, chock-a-block with an excited, engaged, clapping, laughing, appreciative audience, watching classic films as they are meant to be projected is a fantastic experience.

This week we enjoyed Bob Fosse’s great genre-busting musical, CABARET, projected on the huge screen of the Los Angeles Theater (Charles S. Lee, 1931) to a capacity crowd of nearly 2,000.

Michael York introduced the film, full of stories praising his director and his leading lady. We then witnessed, in total wonderment, Liza Minnelli’s astonishing talent as Sally Bowles. Truly her father’s daughter!

One comment on “Liza with a Z at “Last Remaining Seats””