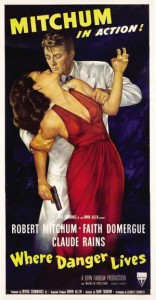 LACMA film curator Ian Birnie has some great stuff coming up this month – a retrospective of the films of Italy-born, New York-raised cameraman Nicholas Musuraca, known for his atmospheric noir cinematography at RKO studios in the 1940s.

Says Ian: “Musuraca is the third in my unofficial survey of noir cinematographers; the first was Stanley Cortez, then Burnett Guffey.”

On opening night, he’s showing OUT OF THE PAST, one of the very best noirs, according to arts•meme film pal Joel Bellman who adds, “…and if you’ve never seen STRANGER ON THE THIRD FLOOR, it’s just amazing. In some quarters, this 1940 film is considered the first true noir.”

See you there! Hope it’s nasty, dark, and wrenching!

4 thoughts on “Musuraca put the noir into film noir”