The Reischtag burns in our collective memory 1 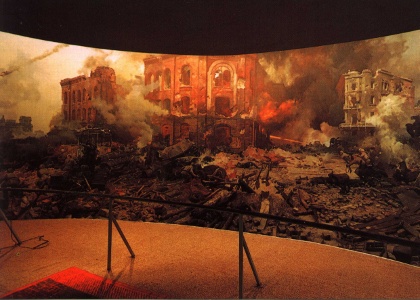 “It wasn’t really about finding something.”

The two artist-partners voyaged from Berlin to Moscow at great effort to maybe find the gone-missing circular art work — but maybe not.

“As artists we’re interested in exploring where you are, where you stand, and how you see things,” they said, chatting over Russian vodka and dumplings following their lecture at L.A.’s own panorama venue, the Velaslavasay, last weekend.

Since the early 1970s, Russians had displayed the hand-painted panorama in a specially built rotunda at Wünsdorf, a town 30 minutes from Berlin. Bismarck had had his military headquarters at Wünsdorf. Nazis also utilized the secret facility, as did the Cold War communists. Now an abandoned shambles, the ghost town captured the imagination of Mohr and Weck, from Munich and Frieberg respectively.

After the fall of the Berlin Wall in 1989, the Russians, de-occupying East Berlin, removed this artful memorial to their military triumph leading to the end of WWII. The huge painting was theirs to take (they had commissioned it) so take it they did — to the Zhukov Museum outside Moscow. (Yes, named after that Zhukov — Berlin was his campaign). There, in 2003, the two women located it.

Just Around the Corner, a free workshop in mapping and cartography | May 8 & 9 at 4 pm | Velaslavasay Panorama

One comment on “The Reischtag burns in our collective memory”