One of a kind, Merce Cunningham … and the lore left behind 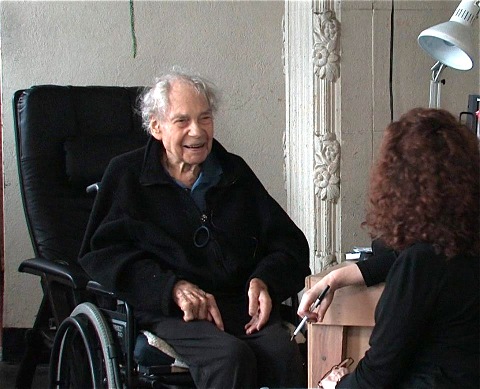 Courtesy of arts·meme friend Nancy Dalva [her blog, the informal formalist], the recently named Merce Cunningham Trust Scholar in Residence, comes this marvelous photo of the great dance maker who passed away in 2009. Nancy sits, at right, in conversation with Cunningham.

Among her other activities, Nancy has been producer/writer of the Internet series Mondays With Merce.

In a note, Nancy updates us on what she’s overseeing at the Merce Cunningham Trust.

The web series proper ended as the company did, with The Last Interview webisode — just Merce (my questions off camera) in the last 20 minutes of our last interview — of some 19, all filmed. The footage of Merce is unedited.

Over the series, “Mondays with Merce” filmed Cunningham:

The crew filmed in New York, Los Angeles, and Moscow — including his Memorial at the Park Avenue Armory — and documented the final weeks of the Merce Cunningham Dance Company.

For the series, I conducted–in addition to the 19 interviews with MC, 42 other interviews, all filmed.

All of this film makes up the “Mondays with Merce” Film Library, which will belong to the Merce Cunningham Trust.