L.A.’s artistic and cultural heritage vs. a rock 2 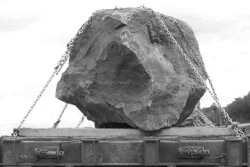 Los Angeles, megalopolis, hosts a cool, vibrant and progressive art scene, an expression of its unique history and inimitable cultural mix. Many Angelenos will derive pleasure and meaning from Michael Heizer‘s Levitated/Slot Mass, a pyramidal granite boulder suspended on concrete rails above a pit carved into the northwest corner of the L.A. County Museum of Art (LACMA) campus.

But let’s let Mr. Govan himself describe the project, rumored to have a price tag of between $5 – 10 million. Here he speaks to ARTINFO.com.

“The Heizer rock probably will be installed in the fall. That goes just north of the Resnick Pavilion. Imagine a 450-foot-long slot in the ground where you walk down a ramp and at the deepest part, 15 feet, a pyramidal monolith of granite is precariously held on the edges of the two walls above. It’s called Levitated Mass because the idea is as you walk under it sort of levitates. We’re working on engineering. It’s at least 700,000 pounds. Right now it’s in Riverside, CA in the quarry. It will take a truck that’s 200 feet long with 200 wheels six to eight days traveling at night until the last day, so it can be a big public spectacle.” 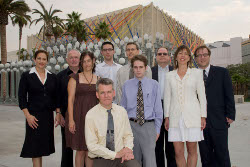 This moment for Los Angeles indeed has the makings of a spectacle, a kind of art-world corollary to the grandiose – not to say bloated – cinematic extravaganzas of D.W. Griffith and C.B. DeMille.

The allusion to film provides a segue to an equally monumental problem: the continued lack of funding for LACMA’s long-running classic film program. Despite going great guns at the museum for the past two years following the huge public outcry that persuaded Mr. Govan to reverse his July 28, 2009 decision to cancel it, the film program’s status still remains unresolved. 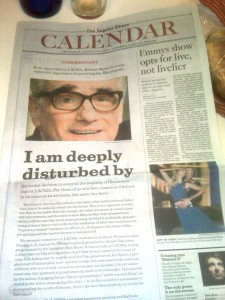 The embarrassment Mr. Govan endured when the public rose against his decision came to an dramatic head when the Los Angeles Times published a “J’accuse!”-style letter, shown at left. In it film director/preservationist Martin Scorsese, a wise grown-up, called on LACMA to commit to the full-fledged presence of classic film at the Bing Theater.

In response, Mr. Govan flung back strident, defensive comments. He turned on his own patrons, accusing film attendees of insufficiently supporting the program, an ugly and unfair ploy. Neither Mr. Govan, nor any of his predecessors, has called upon the audience of the museum’s other departments to justify their continuing existence. It’s a museum, not a commercial entity, i.e., not a movie theater.

Film goers took this in stride, gamely ponying up; despite a deepening economic recession, they tacked a premium onto their membership fees to join a LACMA-sponsored Film Club. The club’s nebulous benefits include a newsletter and “premiere” seating in the Bing Theater, an auditorium whose 600 seats all offer fine viewing of LACMA’s generously sized screen. 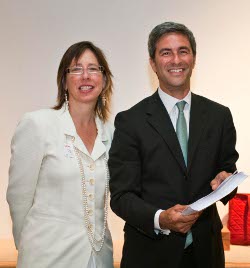 Mr. Govan told a group of L.A. film professionals at the “popcorn summit” on September 1, 2009 (I was in the room) that he was committed to film but that such a series would require the financial backing of an endowment like other viable programs at the museum. He pledged to use his proven skill as a fund raiser to identify a donor to fund the program (the annual operating budget  ~ $200,000). The targeted amount initially bandied about had been $5 – $10 million (just about what it’s estimated they’ll spend on that rock), but that pie-in-the-sky figure got quickly adjusted to reality — a mere $1 – $2 million.

That was half a year ago. We have little choice but to take Mr. Govan at his word that he has striven in good faith to promote the film-program donorship opportunity to our city’s well-heeled  — especially those whose financial good fortune stems directly from movie making.

Till now Govan has failed to raise even that relatively paltry sum. He has succeeded however, with apparent ease, to fund the Heizer rock, a conceptual-art folly that dwarfs even the huff-and-puff locomotive LACMA invited  Jeff Koons to dangle over Wilshire Boulevard. Meanwhile L.A.’s indigenous creative art form — film — gets overlooked.

Mr. Govan: Are we, your audience getting in the way of what you think is important for us to see and do at the County Museum? We asked you to avow in a statement your recognition of film as an art form holding a critical place at LACMA, a request you have thus far spurned. Apparently, we have failed to clearly communicate our desire for a financially secured, ongoing classic film program at the county museum.

What’s up with LACMA’s film program? Will John Ford and Michelangelo Antonioni assume their rightful place next to Matisse and Rembrandt at Fairfax and Wilshire? Or will they be displaced by a rock?

2 thoughts on “L.A.’s artistic and cultural heritage vs. a rock”