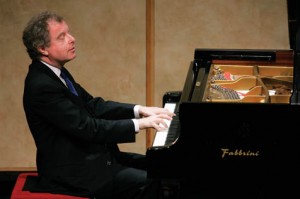 We enjoyed an impromptu Hungarian arts festival in Los Angeles over the past month. First was a Disney Hall recital by Hungarian pianist Andras Schiff known for his Bach interpretation, but lately he is performing all the 32 Beethoven piano sonatas. Schiff is a sublime artist — except when he is glowering at the audience for coughing or rustling programs, which can be a problem at the acoustics-intensive Disney Hall.

As young film students, the two fled when Russian tanks quashed the Hungarian resistance movement of 1956. Having shot film footage of the uprising, their lives were endangered. Arriving in the US, Kovacs first worked on a New England maple syrup farm, which he dryly compared to a communist work camp. He eventually reached the promised land — sunny southern California, the home of his personal hero Greg Toland.  In Los Angeles the reunited friends remained inseparable for the rest of their lives — to the total confusion of all of Hollywood who constantly mixed up their Hungarian names.

(Kovacs died last year; Zsigmond was at the LACMA screening, as was Peter Fonda, who has unbelievably long legs).

Both mens’ careers got off to a pulpy start shooting B movies for Roger Corman. Kovacs got his big break shooting Easy Rider, a film whose cinematography, in my humble opinion, is its outstanding feature. Apparently the Peter Fonda/Dennis Hopper nod of approval meant a lot in the seventies, and the Hungarian camera men proceeded to define the look of Seventies cinema. They worked with every important director: Altman, Bogdanovich (seen Paper Moon recently?  It’s fabulous), Scorcese, Spielberg, DePalma, Warren Beatty, Bob Rafelson, Paul Mazursky, Michael Cimino — the list is ridiculous.  Szigmond shot The Long Goodbye, one of my favorite films. And Deliverance. And McCabe and Mrs. Miller. We also attended LACMA’s retrospective of Miklós Jancsó, a director of austere black-and-white political films that relate to the country’s Communist regime. Unlike Zsigmond and Kovacs, Jancso was an artist who stayed behind.

In the photo at right, Jancsó directs The Round-Up (1965) a harrowing depiction of how authoritarian rule turns neighbor against neighbor. Set up as a period drama about the clampdown of Hungarian peasant-rebels by Hapsburg (Austrian) rulers in 1848, in fact it’s a thinly veiled parable about Russia’s brutal post-1956 Hungarian occupation.