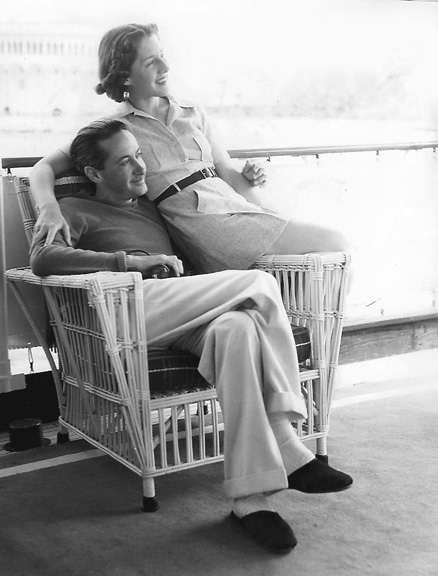 What can I, a mere mortal, possibly add to the legend of Irving Thalberg, Hollywood’s “boy wonder” producer who helped transform American movie making from a haphazard endeavor into a real industry; indeed a mass-market, fantasy production line.

Starting as a secretary to “Uncle” Carl Laemmle at the tender age of 20, Thalberg earned stripes at Universal by bossing around the formidable (and unmanageable) director Erich Von Stroheim. Thus emboldened the upstart then partnered with Louis B. Mayer to position Metro-Goldwyn-Mayer as Hollywood’s prime purveyor of high-quality commercial cinema.

Thalberg championed both Garbo and the Marx Brothers. He married super-shiksa Norma Shearer to form LA’s peerless power couple. And then he died a death worthy of (his own film) Camille at age 37.

Click on the photo to see the gorgeous Thalbergs relaxing at their Santa Monica beach home.

Mark Vieira in his fun coffee-table volume Hollywood Dreams Made Real: Irving Thalberg and the Rise of M-G-M clears up at least some of the myth. Hollywood Heritage offered a scintillating “Evening at the Barn” devoted to Thalberg —  with a roomful of fired-up film buffs peppering Vieira with questions.

Irving Thalberg was the elusive Jewish prince of Hollywood. When he died in 1936, the lights went out as the entire film industry, then still a small village, ached in true collective sadness.