A martini with Jane Fonda 2 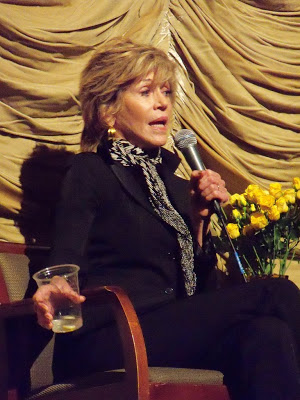 “If you’d had the day I’ve had, you’d be drinking a martini,” said Jane Fonda, as she entered LACMA’s Bing Theater, speaking directly to the audience before taking her seat on stage. She was slated for a conversation prior to the screening of Alan Pakula’s marvelous thriller “Klute,” the actress’s breakthrough dramatic role from 1971.

Still gorgeous at 73 (“Katherine Hepburn was my age when she made “On Golden Pond.””), she recklessly sloshed what looked to us in the audience like a cup of water.

Right. Hanoi Jane, the former Mrs. Vadim-Hayden-Turner, dressed in a chic black pant suit, her wispy coiffure resembling that of a Bel Air lady, swilling a martini from a plastic cup. We all knew better. She was just having her way with us. And we loved it. 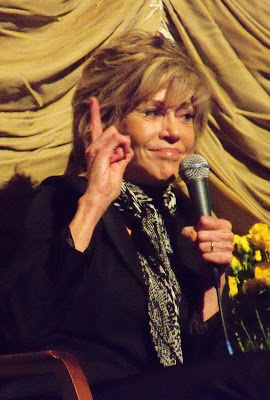 At the outset, a clarification: This formidable daughter of Los Angeles doesn’t merely “say” anything. She rather pronounces. She states it — and it’s fact. She’s mesmerizing, for gawd sakes; she could sell you an exercise video. And she’s inspiring.

Midway through her run in “33 Variations” at the Ahmanson Theatre — a return to the live theater after a 46-year absence — Fonda chatted with L.A. Times film critic Kenneth Turan, whom she rapidly rendered irrelevant save for his mentioning that he once interviewed her dad for T.V. Guide.

“Realllly?” she drawled, her interest piqued, as she seemed to notice Turan for the first (and only) time. Beyond this, Fonda interviewed herself. And she was majestic, her clarion confident voice, total recall, brains, humor, and uncanny ability to relate to a roomful of total strangers. 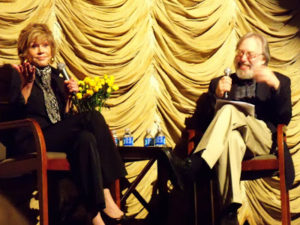 “I’ve made more bad films,” pronounced Fonda, “than anyone who has survived.”

But this overly modest lie pales in contrast to her wonderful film curriculum vitae, the titles of which the fans in LACMA’s 600-seat house called out, lovingly, as though revisiting their own lives just by pronouncing the names.

“It wasn’t pleasant. But [recently], I had a martini and looked at it again and realized, hey! it’s charming!”

Barefoot in the Park

“I made three films together with Robert Redford. Gene Saks directed, and I think it holds up well.

“Redford is the one. He’s iconic. Was there anyone as gorgeous?

“We were meeting at Paramount. Walking down the hallways, the secretaries would all come to their doors just to look at him.

“I was always married when I worked with him — and I always fell in love with him.”

Kissing Robert Redford? “Well it was great for me.” 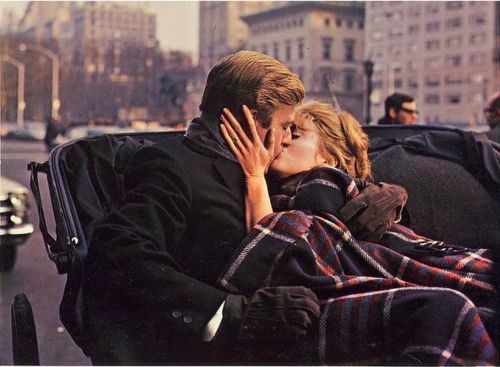 “The film is unbelievable. To work with Redgrave … she’s gossamer, transcendent. Meryl was also in the film… Fred Zinnemann was a genius in where he placed the camera.”

They Shoot Horses, Don’t They?

“I love that movie. I got to work with Sydney Pollack.”

“I was pregnant [with son, Troy Garity, in the audience]. Hal [Ashby, the director] would shoot up to 80 takes. I thought, ‘this is a complete disaster.’ But Hal was an editor, he molded a film from all those takes. He created performances that were not necessarily there.”

“I went to see Lily Tomlin at her one-woman show. And I fell in love with her. Driving in the car, I heard “Two Doors Down” [on the radio] and I saw Dolly Parton as a secretary. We got the great Colin Higgins to write it. And it touched on all the serious issues — through comedy.”

“Yeah, that was really about heavy issues! We made that movie for nothing. We got worked very long hours. Lee Marvin said to me, ‘Listen, Fonda, we’re the stars of this movie, we have to stand up to them.'”

“Klute totally changed my life. In 1971, I had just done Barbarella and I didn’t understand feminism.

“It’s a perfect movie, everything about it, Gordon Willis’s cinematography, I’m really proud of it.”

Fonda spent time hanging out with high-end hookers to prepare to play Bree Daniels. “I watched them do coke, and watched when they hooked up with their johns. Not once did any john even wink at me. I went to Pakula and said, “Hire Faye Dunaway~!”

“The scenes with the psychiatrist, we put them at the end of the three months. They were all improvised. [The role was originally cast as a male psychiatrist], but Bree would never reveal herself to a man.”

“I came to realize I’m very like her — Bree Daniel.

“The ability to attach has been broken. I have always had that problem. It’s been a problem for me; I used it with the character.

“There can have been sexual abuse. My mother was sexually abused. Daughters inherit that.

There’s something right about having Fonda back wandering around our little village. She explained, “I came to L.A. to get a new knee. But I got a new lover. I’ve been shacked up ever since.

“I did a commercial today for L’Oréal; nothing could be more challenging.

But when asked to name her all-time favorite movie, Jane Fonda resolutely replied: “The Grapes of Wrath.”

2 thoughts on “A martini with Jane Fonda”