Tidbits from Robert Redford at the AARP Awards 2 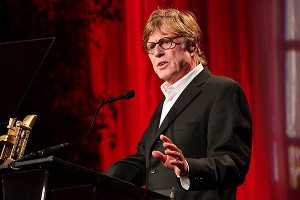 It was interesting to see Robert Redford honored for “Life Achievement” at the AARP “Movies for Grownups Awards” Monday night.

Redford is an ambiguous player in this town. A star among stars, one of the last of the old-school movie actors, he stepped into the breach, launching the Sundance Institute and its independent film festival. What was on one level a snubbing of Hollywood has in fact proven a boon for the film industry. I heard nothing but sincere respect,  even gratitude, expressed Monday night for the American iconoclast. Andy Garcia laid it on particularly thickly.

Also happening in the room: women of all ages flustered by his presence. I chatted with a 30-something black woman as she watched him from a distance … and he was messing her up! He’s still a real ladies’ man.

[Another guy we recently met who has this effect: Mikhail Baryshnikov.]

Introduced by his buddy, Sally Field, the ever-modest actor-director-philanthropist-activist acknowledged the applause, “I’m swelling … and I’m shrinking,” he burbled, rather winningly.

Continuing, he said, “AARP is about retirement. But there’s too much to do.”

Reminiscing, the Santa Monica native noted, “I did not have an illustrious academic career. That was okay. I didn’t belong there.

“I left my country and went to Europe to be a young painter. When I came to New York, I became an actor in theater, t.v., then film. I saw an America that was powerful, complex, and contradictory. I saw so many levels to my country… I wanted to tell the stories of the America I loved, but there had to be sides of it. I wanted to tell that story, warts and all.”

Interviewing Robert Redford for the L.A. Times (read the story here), I mentioned to him that Hollywood is not my regular beat. I told him that I’m a dance writer.

He considered this, thoughtfully, then said, “It’s good you are writing about dance.”

It was good of him to say that to me. Thank you, Robert Redford.

2 thoughts on “Tidbits from Robert Redford at the AARP Awards”