The range is surprising once you see it in print. It spans from television to film to theater to streaming content to a much acclaimed one-woman show. Noted TCM primetime anchor and official host of the TCM Classic Film Festival, Ben Mankiewicz, of the woman this year’s festival honored with the Grauman’s footprint ceremony (she wore sneakers):

“Lily Tomlin’s work has endured for decades because she brings a consistent joyous authenticity and richness to every character she plays. She pulls it off whether she’s performing sketch comedy on Rowan & Martin’s Laugh-In; working in an ensemble cast in Robert Altman’s Nashville; trying to sneak a dead body out of a hospital with Jane Fonda and Dolly Parton in 9 to 5; reinventing herself in Grace and Frankie; or breaking new ground in her innovative one-woman show, The Search for Signs of Intelligent Life in the Universe,”

This lady had a good girlfriend, Jane Fonda, to help celebrate her honor. Also enjoying a giggle from this Funny Lady was Rita Moreno. The great television impresario George Schlatter, Father of Laugh-In, was on hand to applaud his show’s big star. 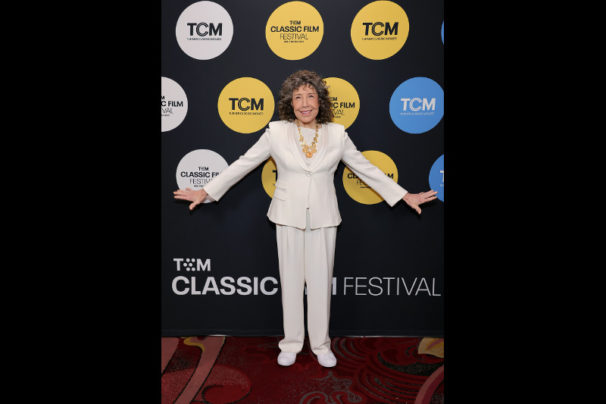 Lily Tomlin, one of America’s foremost comediennes, continues to venture across an ever-widening range of media, starring in television, theater, motion pictures, animation, video, and social media. Throughout her extraordinary career, Tomlin has received numerous awards, including: eight Emmys, with 25 primetime and five daytime nominations; a Tony for her one woman Broadway show, Appearing Nitely; a second Tony for Best Actress, a Drama Desk Award and an Outer Critics’ Circle Award for her one woman performance in Jane Wagner’s The Search for Signs of Intelligent Life in the Universe; a CableAce Award for Executive Producing the film adaptation of The Search; a Grammy for her comedy album, This is a Recordingas well as nominations for her subsequent albums Modern Scream, And That’s the Truth, and On Stage; and two Peabody Awards–the first for the ABC television special, Edith Ann’s Christmas(Just Say Noël), and the second for narrating and executive producing the HBO film, The Celluloid Closet. In 2003, she received the Mark Twain Prize for American Humor and, in December 2014, was the recipient of the prestigious Kennedy Center Honors in Washington DC.