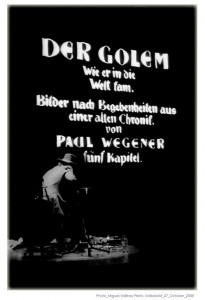 Grammy-nominated Gary Lucas, whom Rolling Stone calls “one of the best and most original guitarists in America,” performed his well-traveled and exceedingly harrowing  score to “Der Golem,” the brilliant 1920 silent horror exemplar of German expressionism. The sold-out performance took place earlier this evening at The Cinefamily on Fairfax Avenue — speaking of ghostly Jewish populations.

And he scared the bejesus out of this nice Jewish girl. The guitar virtuoso’s stringed accompaniment of the progenitor ‘Jews-as-outsiders’ monster movie swapped between a sustained screech and a horrifying scream, and he traded, as well, between two guitars, one electric the other acoustic. Admitting that he improvised against established themes nearly half the time, 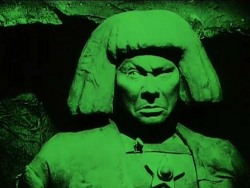 Lucas had his way with his audience, ramping it up to aural freak-out zone during the movie’s most disturbing bits. I literally had to clutch at my heart the terror was coming so fast and furious.

A baroque nightmare of fantastic imagery, “The Golem” (Carl Boese & Paul Wegener, 1920, 86 min.) is the only surviving film from actor/filmmaker Paul Wegener’s series based on the 16th Century Bohemian folk legend of Prague. Played by Wegener himself, the astounding titular monster is molded from clay and brought to life by the Hebrew incantations of a rabbi wishing to defend a Jewish ghetto facing exile. 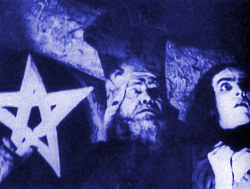 Steeped in 1920s controversy stemming from false accusations of occult endorsement and Weimar anti-Semitism, this dark, moody fable of a lumbering, lovelorn automaton became the inspiration for Boris Karloff’s portrayal of Frankenstein’s monster over a decade later.