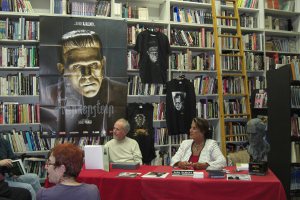 “The Wizard of Oz” scared me when I was seven. Now I leave the room during “Murder, She Wrote,” said Sara Karloff, an elegant woman of a certain age, born when her father was 51.

The dark-skinned beauty’s coal-black hair sports an amazing white streak, reminiscent of the bride of you-know-who.

Chit-chatting genially at a book signing at Hollywood’s Larry Edmunds Book Shop organized to mark the publishing of the authorized biography, Boris Karloff, More Than a Monster, Ms. Karloff admitted she was already 19 when she first saw her father’s iconic performance in the Universal horror classic, “Frankenstein“: “I was out of sync [with the culture].”

“I was sitting in my stepfather’s living room and it came on t.v. one afternoon. I watched it closely, alone, thinking, hmnnn….” 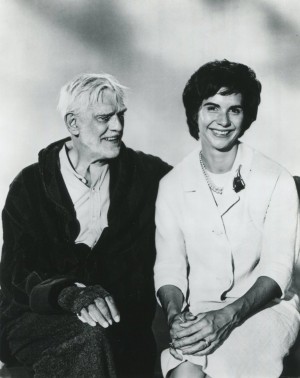 She’s since seen the film innumerable times. (Her words, “I’ve had to see it many, many times.”) Carefully defending her father’s full range of talent — he did film, television, radio, spoken word, and theater throughout his career — she shared a daughter’s view of the Big, Flat-Headed One.

“The film was James Whale the director, Jack Pierce, the make-up artist, and the manner my father portrayed the monster. It was a marriage of all those things.”

Sara, who lives in San Diego county, oversees a website dedicated to her father’s career. She was the actor’s only child (and his heir) from his five marriages, and the two share the same birthday, November 23. Evidence of a deep father-daughter connection was on view in rare family Kodachrome home-movie footage, real treasures, the most touching footage shot on the day of Sara’s christening. In them, the clearly overjoyed Karloff canoodles with his dark-haired newborn baby girl. 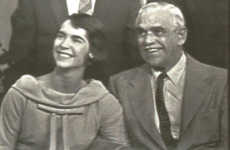 In a video of Karloff’s appearance on Ralph Edwards’ “This is Your Life” television broadcast in 1957, Karloff re-encounters a series of acquaintances from his humble climb to international stardom; among them, Jack Pierce, who transformed the lanky and strong-featured actor into a formidable, giant golem. Karloff says in the video, “Best make-up man in the world, I owe him a lot.”

A self-made man, Karloff essentially dropped out of school in the U.K., stowed away on a steamer to Canada, and, by sheer will, became an actor, learning on the job. He acted up till his death in 1969.

Frankenstein’s daughter admitted “my father was a very handsome man, too.”

The clip below demonstrates Karloff’s robust Frankenstein portrayal, starting with James Whale’s terrifying first view of the monster. That sequence must have scared the bejesus out of matinee ladies in 1931, because it freaks me out now.