She’s a rainbow, strums Gary Lucas at the Grammy Museum 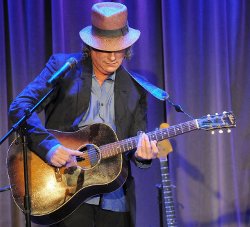 The instant Gary Lucas put his hand to his acoustic guitar and blasted into “She’s a Rainbow,” I took off into the stratosphere. A one-way ticket to pleasure-ville.

I had forgotten this great Rolling Stones anthem — a love paean by Jagger/Richards dedicated to their flower-child cohorts.

She comes in colours.

The globe-trotting musician played a mini-concert for a lucky audience following his guitar conversation with Grammy guy, Scott Goldman, at the Grammy Museum Wednesday night.

Lucas, who pursued a relationship with Don Van Vliet in the seventies all the while concealing his aspiration to join Beefheart’s Magic Band (he eventually joined), takes a big-picture approach to music. A master of both acoustic and electric, he plays the full range, from Cuban beat, American folk ditties, Chinese pop songs, and, phenomenally, whacked-out avant garde.