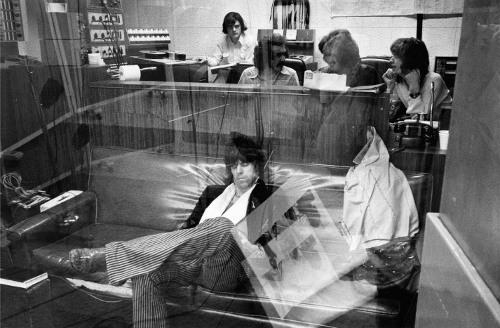 Who knew? When we were high school kids in suburban Pittsburgh in 1972, devouring the images on the cover of The Rolling Stones’s unspeakably great double album, “Exile on Main Street,” who knew that 39 years later, in a Los Angeles art gallery, I’d have a nice chat with the graphic artist who created the iconic, design-intensive album cover?

Just one week after meeting John Van Hamersveld at Gregory Way, I visited his new photography show, “T.V. LIFE.” There, confronting a photo (posted above) of a Rolling Stones sound-mixing session, I learned that Van Hamersveld executed “Exile”‘s intricate and weird design, an eye-grabbing montage of collage art accented in semi-putrid green and purple. In 1972, my assumption about the disturbingly freaky images was that they were the work of a Brit — you know how eccentric they are.

But the designer is a guy straight outta of southern California; Van Hamersveld, his other claim to fame key art from the film “The Endless Summer.” And he’s a very nice person. Apropos “Exile on Main Street,” I learned that the . . .

All of this data I grappled with as Van Hamersveld toured me through the excellent “T.V. Life.” The photography show, staged in conjunction with the publishing of a book of the same name, hangs in a cool, deep, rectangular Koreatown art gallery. It’s a magical mystery tour (oh, Van Hamersveld designed that cover, too) of Los Angeles pop ‘n art culture of the late ’60s and early ’70s. Recommended.

One other tidbit. Van Hamersveld’s shot of the Stones includes some art work in the window’s reflection. Those would be sketches for a huge Sunset Boulevard billboard Van Hamersveld designed for the album. Turned out like this: 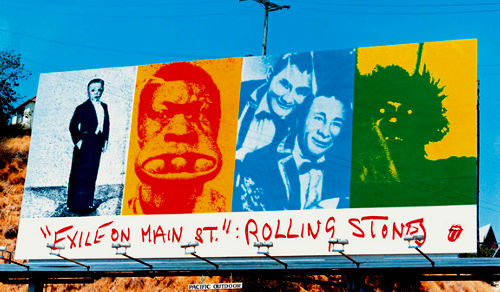