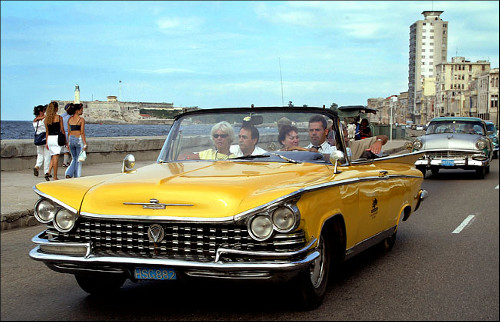 The ballet was choreographed in 1988 by Alicia Alonso, after Petipa’s original dating from 1869. 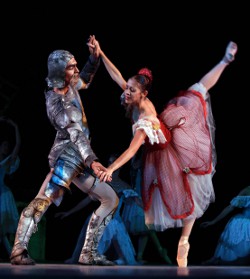 It was a winsome and nostalgic tour in a ballet time capsule, a demonstration of how it used to be done, a display of clean and unfettered classical technique by the engaging, youthful company. The dancers, brown skinned and with few exceptions homogeneous in their look, burst through the conventions of Minkus’s war horse of a three-act ballet, eager to please. The ballet’s claptrap narrative about the old geezer, Don Q, with sidekick Sancho Panza, pursuing Dulcinea, the feminine ideal, faded into irrelevance. What remained was a showcase of the beautifully trained dancers’ technical prowess.

Remarkable was the purity of the port de bras, an art lost, indeed killed, in the U.S.: a clean, highly controlled curvilinear frame for the ladies’ pretty heads, and an ergonomic support for the men’s bountiful natural leaps powered by exceptional ballon, or “ballet bounce.”

In tempi whose speedometer Conductor Giovanni Duarte cranked up and down (Minkus’s soporific score could take it), the Cubans performed some of their most technical feats with body-defying slowness, inserting hesitations in their balances, then teasing the audience with wicked grins. The breaking of the fourth wall is not very standard, but youth and vigor prevailed and this audience member succumbed.

Act two’s dream sequence saw the filing of the female brigade, and here the presence of the ballet’s 90-year old director

Alonso was most evident. The ladies echoed the great former ballerina’s long-necked romantic line, unearthly balances, and soft, noiseless pointe work that you simply don’t see anymore. The muffled non-sound emanating from a stageful of 16 corps de ballet beauties was a glorious occurrence. I scribbled “cupcakes” in my notes.

The Don Q grand pas de deux, Act three’s huge fun, featured a somewhat unequal pairing of Anette Delgado (Kitri) and Dani Hernández (Don Basilo). She, more advanced than he, confidently inserted multiple spins into her barrage of fouettés and pulled it off; he powered ’round the stage on a pair of Grade-A legs with upper body not 100% connected. He’ll be fully cooked in three years, stay tuned.

Perhaps it’s because I just returned from a tour with Lula Washington Dance Theatre in China, bringing an utterly unknown variety of American dance to a communist country, (where we were met with impeccable manners), but I’m uncomfortable with the critical drubbing the Cubans are receiving in the U.S.  The Cubans should be held to a separate standard. We can learn from them. We need to embrace them. They deserve it considering the cockamamie punitive foreign policy toward their nation.