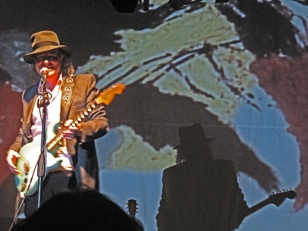 “The music business has never quite known what to make of Gary Lucas. Go to a site for streaming or downloading songs, and you may find his music consigned to a vague category called “other.” Look him up in standard reference works, and he’s likely to be referred to as a “legendary left-field guitarist” whose work is “eclectic” or just plain “eccentric.”

“I love drones and the deep, hypnotic grooves they can produce,” he said. “It’s the mother source of music, and most of the music I really like, whether Miles or Coltrane’s modal stuff, Indian or Jewish or African music, springs from that. Even the pedal point of a Bach cantata has a drone going through it. It’s a holy centrifugal force, a reference that can ground a piece so that you can ascend and lift and improvise in a celestial way.” Read more, NYT.

In January, we attended, then wrote about Lucas’s wonderful Captain Beefheart homage night at the Echoplex. Said Lucas, from the stage, in a eulogy: