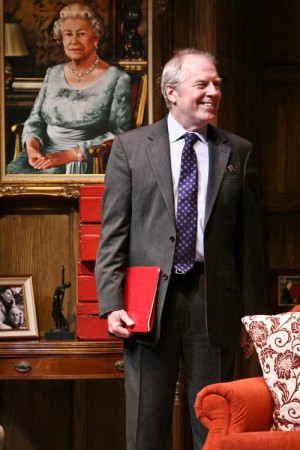 “Laughter is the sound of recognition,” says the author of the book Comedy Rules, Jonathan Lynn. The veteran filmmaker, novelist, screenwriter, and director co-wrote, along with Sir Antony Jay, Yes, Prime Minister, the former hit BBC television series now restaged as theater at the Geffen Playhouse.

A laugh-out-loud political satire, Yes, Prime Minister depicts a team of senior advisors to the British PM unhinged by the fallout of a European debt crisis. In lock-down mode at the official country residence, this gang of self-interested public servants parades the comic range: goofy slapstick, biting satire and witty word play.

The two-act play, which a stellar cast runs like a wind-up toy, pokes at the perfidy of the British ruling class. Prime Minister Jim Hacker (Michael McKean) is stubbornly determined to follow his own path. But competing for the PM’s bandwidth are Principal Private Secretary Bernard Woolley (Jefferson Mays), Cabinet Secretary Sir Humphrey  (Dakin Matthews), and Special Policy Advisor Claire Sutton (Tara Summers). The war of the words is won through foxy politcal haggling. 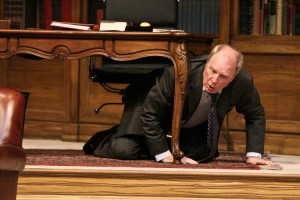 “For me, the great pleasure is in hearing people laugh at something I’ve written or directed … or both,” he says.

“The play is full of politically incorrect ideas, which, when presented in comedy, people are thrilled. They laugh when they hear something they [themselves] may have wanted to say or do. But they may be laughing at ideas they would find unacceptable in real life.

“For example, in Yes, Prime Minister, the idea that democracy is not worth having. Or that people should be locked up and the key thrown away. Or that losing face is more to be avoided than the euro imploding.

“The point about writing comedy is that sometimes its words are deadly serious. The more deadly serious, and the worse the situation, the funnier it becomes,” says Lynn. “If it’s about something of desperate importance to the characters, the audience understands why they are behaving [as they are].” 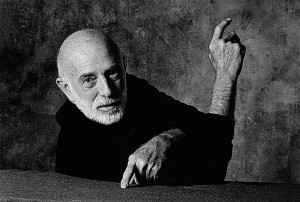 Lynn, a longtime L.A. resident, spoke by phone from New York. Looking back over a long career, he has memories of having worked for the best. In his acting debut, he played Motel the Tailor in the London production of “Fiddler on the Roof.” Jerome Robbins was his director.

Says Lynn, “Robbins transcended the differences between the arts .. “Fiddler” was great as dance, drama and music.” 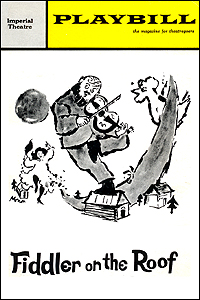 Even as a young man, Lynn could sense Robbins’s talent. “It was absolutely obvious he was a total genius. We rehearsed without him, with his assistants, who were perfectly good,” Lynn remembers. “Then he arrived from New York and took it by the scruff of the neck. Ten days later, what had been good became brilliant.

Did Robbins, who was a notoriously tough taskmaster, influence his working style?

“I try not to use a heavy hand as a director, coaxing, cajoling instead. Occasionally it’s required to be tough, but not like Robbins did it.

“Of course I am determined to get the show as good as I can get it. Nobody can always succeed. Robbins didn’t always succeed either.

“Mostly [Robbins] was perfectly pleasant. He wouldn’t accept second best. He knew what he wanted. He was a perfectionist.”

As for Yes, Prime Minister at the Geffen, Lynn admits, “I am pretty happy with it. It’s getting tumultuous laughs,” he says in a satisfied tone. “It’s about the British political system. But almost all of it is relevant to the U.S.”