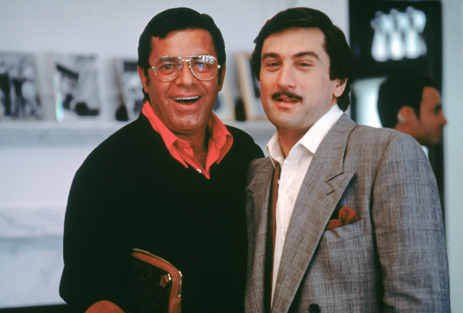 The role of the (stalked) talk-show host in Martin Scorsese’s brilliant black comedy, “The King of Comedy” (1982), was first envisaged for Johnny Carson. When Carson declined, Scorsese, in a stroke of genius, turned to Jerry Lewis.

Lewis is so fantastic in this movie; he skates the narrow edge of powerful, scary, and vulnerable. Really a good performance from DeNiro too — perhaps my favorite from him. My film-loving friend Joel Bellman shares his take on “King”:

“Countless flashes of humor throughout his extensive canon notwithstanding, apart from “After Hours” Scorsese has shown little interest in making funny movies. “The King of Comedy” is no exception: dark and weird, it’s easily the most unsettling film ever to star a successful mainstream comedian. Scorsese and screenwriter Paul Zimmerman pitilessly showcase the leads at their most pathetic, desperate, or simply deranged,” he writes, adding, “Of course it’s a masterpiece.”

Jerry Lewis — who appears to be in better health than in recent years — is slated to host the screening at the upcoming TCM Classic Film Festival — coming our way soon, Los Angeles, April 22 – 25.

I am reminded that my father, Mike Levine (1923-1998), interviewed Jerry Lewis as a guest on his “Contact” talk show (KDKA-Radio in Pittsburgh). That was in 1966, years before Lewis would play a television talk show host in “The King of Comedy.” My father’s program covered all the hot topics of the sixties and seventies — plus he interviewed celebrities (that’s Phyllis Diller in the wall photo). Click for better view. 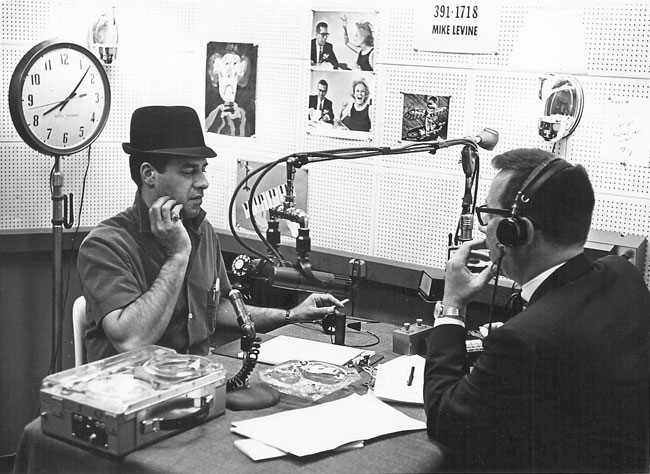