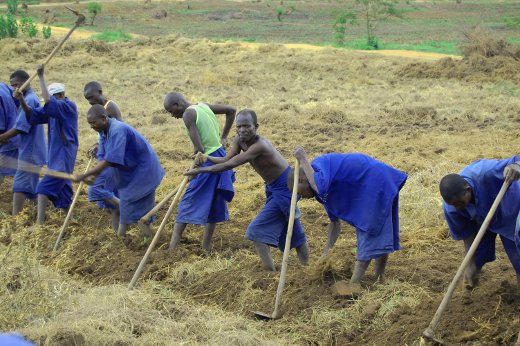 The benign landscape at left is a Rwandan work camp.

The workers in the photo are Hutu tribesmen convicted of using machetes to hack to death Tutsi men, women and children in the murderous genocide of 1994.

In the spring of 2008, renowned Holocaust scholar Daniel Jonah Goldhagen took a camera crew with him on a worldwide journey to explore the roots of genocide in our time.

The resulting documentary, "Worse Than War" is the filmed record of that trip, following Goldhagen as he travels to Rwanda, Bosnia, Ukraine, Guatemala, Germany – sites of some of the worst mass slaughters in the past century – and encounters an extraordinary array of people who provide powerful insights into why genocide continues to plague our planet.

Kudos go especially to our community member, Adam Hyman, executive director of the Los Angeles Filmforum, for his outstanding participation in this important project. He co-produced, with, among others, the film's director Mike DeWitt.