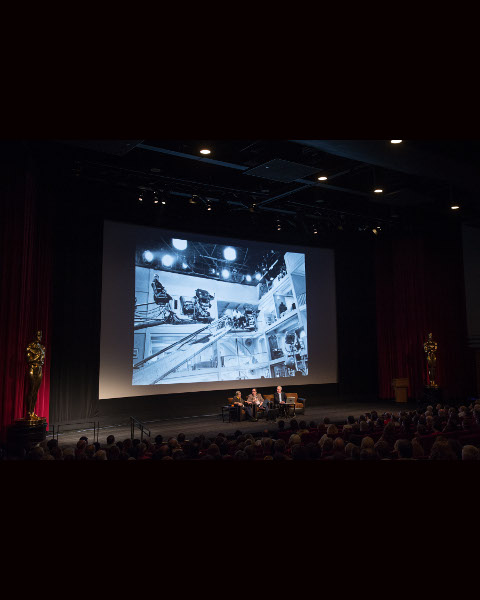 PausePlayPlayPrev|Next
“That was so nice,” murmured Jerry Lewis, 86, in acknowledgment of the heartfelt standing ovation that erupted when he stepped onto the Samuel Goldwyn Theater stage on Thursday night. The comedian/actor/producer-director and all-around entertainment legend was being honored at the Academy of Motion Picture Arts and Sciences.

Still emitting zingers but notably less frenetic than in prior years, the perpetually youthful comic was an active participant, to the delight of all, in “The Innovative Genius of Jerry Lewis.” Structured as a panel discussion with visual aids, the evening, hosted by the Academy’s Science and Technology Council, explored how Lewis used the industry’s evolving technical gadgetry to amp up his formidable talent.

Lewis’s film output at Paramount Pictures (where he maintained his own production unit) was the focus of the conversation. There, amidst a barrage of posted signs [“Look, Listen & Think, It Might Help!”] geared at bestowing his high-energy work ethic onto the Paramount crew, Lewis produced and directed a slew of movies including THE BELLBOY (1960), THE LADIES’ MAN (1961) THE ERRAND BOY(1962), THE NUTTY PROFESSOR (1963) and THE PATSY (1964).

“I love aggressive working people,” Lewis explained. “I [inherited] uptight crew from other films. I had the best time loosening them up. The [working] structure of my films was basically simple: ‘Have fun!’

“At the end of the shoot, I had 160 crew members. Guys were wiping their eyes, they didn’t want the film to be over.

“They became fatherly to me. I spewed out the love that I had for the job It was difficult to hide that.”

Co-hosts Craig Barron, an Academy Award-winning visual effects supervisor, and Ben Burtt, an Academy Award-winning sound designer, asked Lewis to describe his creativity with sound effects. A hilarious clip from WHO’S MINDING THE STORE? (Frank Tashlin directed) featured a vacuum cleaner sucking up objects in its path — plates, wigs, shoes, dixie cups, kitchen ware — all brought to aural-exaggeration with wicked sound effects. In THE NUTTY PROFESSOR, Lewis paces through a hilarious schtick in which common classroom sounds (chalk on a blackboard, a girl chewing gum) are insanely exaggerated to aggravate his hangover.

“I never had a drink of consequence,” claimed Lewis. “I would have a beer at the baseball game. But I had ten years with a great partner who taught me all about it.”

More on Lewis at the Academy to come …