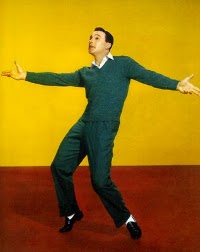 A parade of Technicolor-tinged dance sequences enchanted a full house at the Samuel Goldwyn Theater Thursday night. “A Centennial Tribute to Gene Kelly,” the first of a two-part event hosted by the Academy of Motion Picture Arts and Sciences honored the beloved dancer-choreographer-director in this most effective manner — by screening his sensational dance clips.

A trio of sailors, pounding the pavement, sings the praises of New York City. An average Joe, twirling an umbrella, splish-splashes joyfully in a rain gutter. An expatriate painter, standing in the basin of an ornate Parisian fountain, cradles his lady in his strong arms. These images, wrested respectively from On the Town, Singin’ in the Rain, and An American in Paris, burn in our cultural memory. All iconic, all Gene Kelly, all high Hollywood.

Before the program, a long queue of fans wrapped ’round the Academy’s Wilshire Boulevard headquarters. Once seated in the theater, located not three miles from the Culver City sound stage where Kelly cavorted in fake rain, they learned that his sunny smile was also faked; he was running a 103-degree temperature the day “Singin’ in the Rain” was filmed. A roster of today’s stars paid their respects to a man who would have turned 100 this year. Indeed when he died in 1996, Kelly was among Hollywood’s last old-school movie stars.

Beamed in by video from the set of Les Miserables (now in production), the avowed Kelly fanatic Hugh Jackman said, “Gene Kelly, honestly, to me, is a hero. [When I was] growing up in the Sydney suburbs, my father brought me a copy of Singin’ in the Rain. [Kelly] was an extraordinary dancer; his athleticism, his grace, his ingenuity, his sense of fun whilst he did it all… It seemed effortless.”

Justin Timberlake called Kelly “a master poet in motion … pure magic, also masculine, earthy and true.” He then confessed to being “one of the millions who … stole a move or two or three or four from Gene Kelly. But I’m cool with that. It puts me in the company of Michael Jackson.”

“Glee” dancer Harry Shum, Jr. admitted to being “blown away” the first time he saw “Singin’.” Then he said he “dug deeper … for Kelly’s syncopation, precision and athleticism.”

Director-Choreographer Kenny Ortega, a veritable Kelly protégé, and the last to direct Kelly dancing in a movie (Xanadu, 1980) noted, “He showed me his movies, [explaining] why he chose shots.”

Ortega, who’s now in pre-production for his reprise of Dirty Dancing, continued with emotion: “He was a great man, my mentor, educator, supporter. He put a viewfinder around my neck that he used for Singin’ in the Rain and handed me stop watch and taught me how to design choreography for the frame. He changed my life. I am forever grateful.”

Said film critic Leonard Maltin in private conversation: “What can you say? He was a great performer and a great creative force. He stands on the top of a mountain of entertainment. He was a complete performer.”

Chit-chatting as well after the show were two of the great male dancers from Jerome Robbins’ West Side Story. Russ Tamblyn reminisced about holing up for a drink with Kelly in the booth of a New York City bar. George Chakiris, who won an Oscar winner for his role as Bernardo and one of the most silken dancers ever captured on film, co-starred with Kelly in Jacques Demy’s Les Demoiselles de Rochefort.

Elated by the clips, Chakiris said, “Growing up as a kid, this was the thing that made me want to dance. He’s so committed, from the tip of his head right down, so precise and sharp. And Cyd [Charisse] in that green dress — good Lord!”

Ellen Harrington, the Academy’s Director of Exhibitions and Special Events said, “We were wanting to do something for Gene when he was still alive. Now, we’re doing the centennial. We want to show how vital and relevant he still is today, not just an old-time star.”

The statuesque Ms. Kelly shared the story, with self-deprecating humor, of the couple’s first meeting. She had been hired, in 1985, to research a documentary about the Smithsonian Museum. Kelly was its narrator. The two fell in love reading poetry and playing word games. “He was a wonderful blend of erudite gentleman and Pittsburgh street kid,” she said. Kelly had prior marriages to actress Betsy Blair and dancer Jeanne Coyne, who also assisted him in choreography. He was the father of three children.

Friday evening’s “Gene Kelly Choreography and the Camera” dug deeper. The tech wonks of Academy’s Science and Technology Council moved in for analysis and dissection. Experts in animation, direction, lighting, and sound gave a huge thumbs up to Kelly’s contribution. The “Alter-Ego” sequence from Cover Girl and the Jerry the Mouse duet from Anchors Aweigh advanced not only the art of film making but also its craft.

The evening closed with spectacular “making of” footage showing Kelly directing the humongous parade sequence from Hello Dolly, choreographed by Michael Kidd. It more than demonstrated, in his widow’s words, that Gene Kelly was about “joy and celebrating life.”