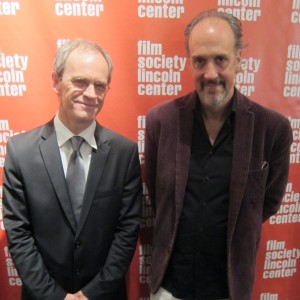 A familiar pair has been named as co-directors of programming at the Film Society of Lincoln Center, replacing the longtime Director Richard Peña, who will celebrate his 25th and final New York Film Festival later this month.

Kent Jones, at right, will return to the Film Society next year to lead the New York Film Festival and Robert Koehler, at left, will leave his duties in LA. to move to New York to handle year-round programming at Lincoln Center.

Both gentlemen are friends of arts·meme. And very nice and smart guys, both. Good writers, too. So, congratulations!

Kent Jones, a programmer, writer and filmmaker who began his programming career at Film Forum and the Rotterdam Film Festival, joined the Film Society of Lincoln Center in 1998 as the Associate Director of Programming and was a member of the New York Film Festival selection committee from 2002 through 2009. Jones is a 2012 Guggenheim Fellow and over the years he has worked closely with Martin Scorsese on a number of documentaries, including My Voyage to Italy (2001), A Letter to Elia (2010) and Val Lewton: The Man in the Shadows (2007). In 2007, his collection of writings, Physical Evidence, was published and he recently edited a volume on the writings of Olivier Assayas.

Film critic and journalist Robert Koehler, who joined AFI Fest in Los Angeles as the director of programming in 2009, was an instructor and programmer for UCLA Extension from 2003 – 2007. He also presented a film series entitled “The Films That Got Away” at multiple venues in Los Angeles. Koehler was a theater critic for the LA Weekly and the Los Angeles Times and he has also written for numerous publications, including recent festival coverage for FilmLinc.com. His books include Cine Argentino 1999 – 2009 and On Film Festivals.