Jerry Beck & the fine art of classic animation on TCM

Expert Jerry Beck defines classic animation as “theatrically-released studio or independent animated shorts and features from 1906 through roughly 1976.” The fun, arty fodder is getting its due this Sunday, October 21, with “Rare Animation,” a six-hour broadcast on Turner Classic Movies. Jerry, who blogs at cartoonbrew, co-hosts the evening with Robert Osborne.

I had the pleasure of meeting this cartoon maven — he’s an all-around cinephile with scholarly knowledge of animation and several books to his credit — not in Los Angeles, where we both skulk similar screening rooms, but in a hotel restaurant in Atlanta. Jerry and I were both nervously awaiting the next-day taping of our first co-hosting stints on the channel; mine, “Choreography by Jack Cole,” was broadcast September 10. I’m excited to watch Jerry’s curated cartoon tour. The image below, from UPA cartoons, burns deeply in my little-girl memory banks. 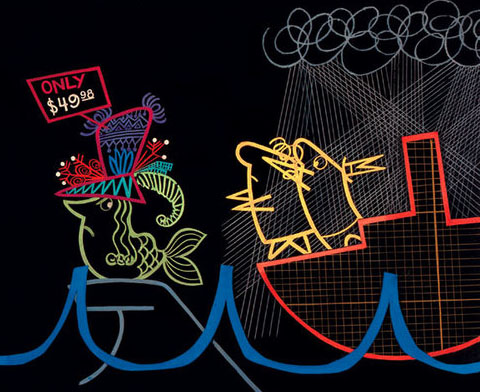 We like Max Fleischer cartoons at arts·meme. One of our favorites is Dancing on the Moon (1935).