The astronaut and the ballerina 1 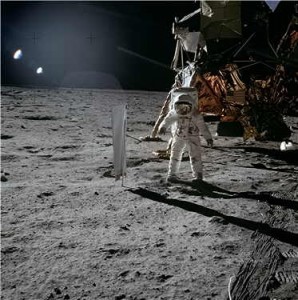 Weightlessness has its rewards.

In 1950, the ballerina was a featherweight slithering down her partner’s body and marching on her highest pointes as Balanchine’s snaky Siren in “The Prodigal Son.”

In 1969 the astronaut, seen at right, clocked in at 35 pounds while padding around the moon’s soft terrain like a stuffed doll.

In a down-to-earth ceremony on Tuesday, Los Angeles County Supervisor Zev Yaroslavsky conferred a scroll for life achievement to ballerina Yvonne Mounsey. Astronaut Buzz Aldrin got the same tribute one week prior.

Observers feel the weight of the moment. Two space travelers with a shared destiny. It brings to mind our favorite Max Fleischer cartoon:

For further scientific evidence, watch the astronaut drop a feather on the moon!

Read my story in the Los Angeles Times.