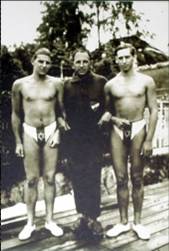 Jewish guys are not wimps — never have been.

In a talk at the Yiddish Cultural Institute, Strom shared his research into  “muscular Judaism” —  the unexpected idea that Jewish society of pre-World War II Europe was steeped in a culture of healthy body building.

Strom’s disturbing thesis is that Jews internalized the stereotype of being weak and non-athletic that was projected onto them by anti-Semites. Imprisonment in ghettos and camps advanced the negative self image, and Jews reinvented as brain workers. The once widespread robust physical culture dissipated. 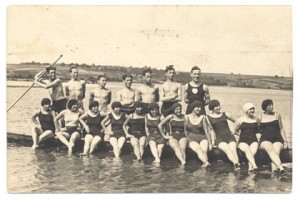 Jewish sports clubs — for both men and women — started in Bulgaria in 1897, spreading to Hungary and Russia. By 1913 clubs enjoyed strong networks throughout western Austria, Bohemia and Moravia. In the 1920s Jewish ‘gymnastic’ associations flourished in Germany and Poland. In Germany, Jewish physical culture found particular expression in Dalcroze, an early feeding tube to American modern dance. 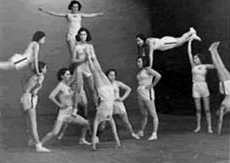 Organized Jewish athletics peaked in 1931 with the Workers Games (“Red Games”) in Vienna in which Jews competed in team sports as well as boxing, wrestling, weight lifting. 1932 saw the first Maccabiah Games in Tel Aviv. Following the second games in 1935, many participants stayed behind in (then) Palestine.

Hakoach (“the force”) was the sports club founded in Vienna in 1909 that by 1925 won the Austrian national title, beating all comers. Hakoach was then the largest such club in the world and its sports field a lively meeting place for Viennese Jews. Nazis confiscated Hakoach’s facilities in 1938 and in 1941 banned and prohibited its name.

As life deteriorated for Europe’s Jews, the clubs banded together to defend the powerless against hooligan attacks particularly in small towns and villages. Strom notes that the discipline of physical culture formed the backbone of the resistance movement. Daily exercise regimes may also have empowered those who survived concentration camps, he says.