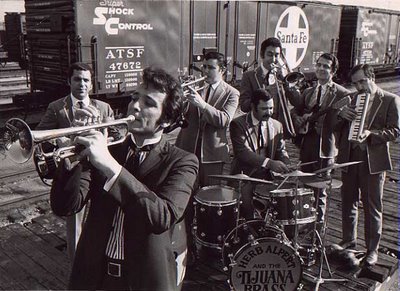 Herb Alpert was born in Los Angeles in 1935 and he lives here still.

His father, a Russian Jew from Kiev, was a tailor. His mother, of Hungarian descent, encouraged his music, giving him a trumpet on his eighth birthday.

Alpert grew up in Fairfax district, the second Jewish neighborhood in Los Angeles after Boyle Heights. It was there, in the ‘hood, in a home recording studio, that Alpert concocted his first hit.

Years of hawking singles to distracted deejays sent the frustrated Alpert to Tijuana, but not for the standard south-of-the-border debauch.

Instead, he returned to L.A. smitten by mariachi’s sweet-and-sour blend of guitar and horn. Back in the family garage/studio, Alpert mixed The Lonely Bull — a plaintive solo trumpet line interwoven with bullfight crowd noise. This mildy exotic sound infiltrated American radio waves in 1962 during the cultural vacuum that preceded the British invasion.

Soon Alpert was scrambling to flesh out his studio-cooked music with a real band called Tijuana Brass. The group of gringos (mostly Jewish guys) and a few others Alpert knew from the USC marching band fobbed themselves off as true Mexican mariachis. Now even in Fairfax district that’s called chutzpah.

Alpert’s Mexican Shuffle soon made jingle history as the Teaberry Chewing Gum theme song. The band and the business, A&M records, were a huge success.

Fast forward four decades and the modest, publicity-shy Alpert and his wife, singer Lani Hall, have become premiere American arts patrons, doling out generous grants to artists at both start-up and mid-career stages.

I write in The Jewish Journal of Los Angeles about a young ballet dancer who is a recent recipient of Alpert’s largesse.