Skirball’s “Get down, Moses” listening party 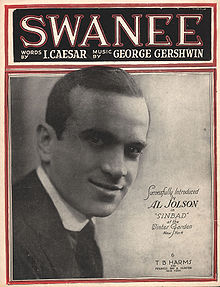 The “listening party” — a groovy event in which cultural anthropologist Josh Kun spins discs to illustrate the complex historic relationship between African-American and Jewish popular music — had serious naming issues.

Kun launched it as “Black Sabbath.” It got changed to “Go Down, Moses.” Then, some genius in the Skirball Center p.r. department tweaked it further to “Get Down, Moses.”

And that’s precisely what a mixed-race crowd did the other night, while sipping chardonnay on a Skirball patio high above the roaring 405 freeway. They got down.

Kun, a loony, but very smart, writer/vinyl enthusiast, plucked samples from his estimable collection to illustrate the entangled musical cross-fertilization between two oppressed minority groups in the twentieth century. He and his partner, Roger Bennett, organized the “Jews on Vinyl” exhibit on display at Skirball till September.

Kicking off with vaudeville and minstrelsy led Kun directly to Al Jolson, the cantor’s son who regularly did schtick in black face. Jolson’s hit rendering of George Gershwin’s “Swanee” represents the collaboration of two Russian-Jewish immigrants who probably never ventured below Manhattan waxing on about their black Mamie down south. Could this define chutzpah?

The man who performed in black face also fought discrimination on Broadway, promoting equality and paving the way for many black performers, playwrights, and songwriters, including Cab Calloway, Louis Armstrong, Duke Ellington, Fats Waller, and Ethel Waters. African-Americans honored Jolson by turning out in droves for his funeral. (And the hugely talented Calloway, when he wasn’t rapping in jive, could sing in perfect accented Yiddish.)

Kun paired Jolson’s “Swanee” with a version by none other than Aretha Franklin, and the ping-pong match was on. We heard dueling versions of “My Yiddishe Mama,” first from the rotund Jewish songstress, Sophie Tucker, but then covered by, ahem, Billie Holiday.

And quel torchsong-du-kvetch. Here are the lyrics:

Can you imagine Billie Holiday croaking that lyric at a snail’s pace? You gotta hear it to believe it.

Kun’s theory is that the two groups, in a moment of mutual recognition, jumped with enthusiasm into each others’ music. He pointed to the similarity between mournful Jewish prayers and the blues. More close contact came when Jews and blacks mixed 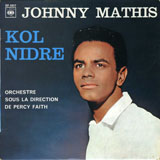 in integrated big bands like Goodman’s. And then there were the pervasive Jewish talent managers. Emblematic: Irving Mills, the Yiddish-spewing manager of both Duke Ellington and Cab Calloway.

Baritone Johnny Hartman crooned in the mamaloshen; Lena Horne set a civil rights anthem to the tune of “Hava Nagila”; and Ella Fitzgerald nailed “Bei Mir Bist Du Schoen,” which, before being etched into vinyl by the mega-shiksa Andrews, was the signature of black singing duo Johnny and George.

And who can forget Johnny Mathis’s velvet-toned “Kol Nidre”? If he davened in my shul, I’d have an easier fast.