The golden light in which gifted choreographer Ohad Naharin bathes his all-female quintet in “Decadance” is Mediterranean.

It brings to mind the color of the air when frenetic Tel Aviv calms itself in the withering heat of the afternoon sun.

Visions of Israel inevitably surface while watching “Decadance” Naharin’s perennial greatest-hits collection of choreographic output since the 1980s presented by Cedar Lake Contemporary Ballet at the American Dance Festival at Duke University this past weekend.

[I am attending the ADF as part of a three-week-long Dance Criticism Institute run by the National Endowment for the Arts.]

Is the fierce energy careening through Naharin’s dance-dramas an Israeli thing? Or is it all about Naharin, the superstar choreographer just awarded the American Dance Festival’s Samuel H. Scripps award?

No variety of light – natural or staged – could derail the cool reserve of Naharin’s ladies as they execute off-kilter moves; their shapely limbs set off neatly by simple black pleated skirts. This witty spacious landscape-painting for strong female dancing exemplifies Naharin’s uncanny mastery of space and time. The quintet’s phrases accrue meaning by illustrating a hard-boiled Charles Bukowski poem: Make money, but don’t work too hard. Just make it baby, make it. The dead-panned repetitions, organic flow of time, and tasty performances make this dance snippet from 2006 the highest quality choreography swatch of the evening. 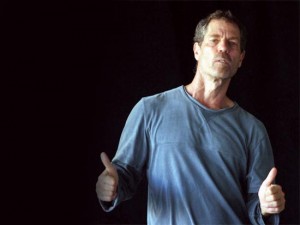 Will the day arrive, one wonders, when Naharin drops the Peck’s Bad Jewish Boy schtick and stops biting the hand that feeds him, for example, with his vulgarity-laced sound tracks? Rapidly losing shock value, as well, are Naharin’s trademark audience incursions in which super-cool dancers in dark suits and fedoras drag unwilling audience members to schlep around the stage as amiable klutzes.

And what’s with targeting blue-haired old ladies as primary victims? In Israel they’d take their handbag and give you a klopf im kop — a smack right on your head.

Naharin staged this version of “Decadance” (he’s made several) on the Manhattan-based Cedar Lake troupe, the pet project of Wal-Mart heiress Nancy Walton Laurie. Ostensibly this wealthy arts patron could buy anything for her superb dancers, in this case, a work by by the 56-year old Israeli playing at the top of his game. Putting aside his main gig as artistic director of Israel’s national dance troupe, Batsheva Dance Company, Naharin personally coached the Cedar Lakers for three months in his intense, soul-engaging movement language he calls “gaga” … with admirable results. 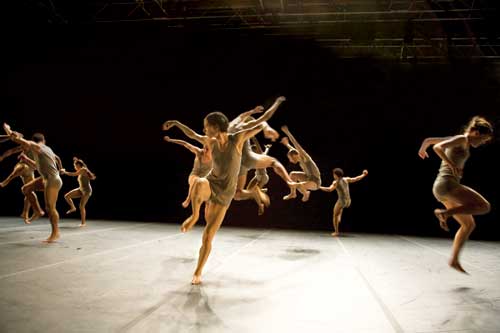 “Decadance” rocks its score hard. The second half of the program opens with a surf’s-up version of “Hava Negila,” the wedding-and-bar mitzvah song that has Jews jumping onto dance floors around the world. Dressed in their sexy gangster get-ups, Ohad’s crew erupts in a frenetic blast of joyful group dance so thrilling that the heart pangs. With envy.

Because you want to do that too. Everyone does.

“Echod Mi Yodea,” a traditional 13-round cumulative chant normally sung at the Passover Seder, gives religious orthodoxy a well-aimed Naharin potch in tuchas. Eleven seated dancers face the audience as words blast in Hebrew, “Who knows one? One is the god of the world.” Twisting wrenchingly in their chairs, and then diving like kamikazes to the floor, the troupe gradually strips to its skivvies. The choreographer’s penchant for kooky music and for plummeting the madness of both dancers and audience delivers the goods.

He brings out our inner mishuggenah.