When American women demanded, and then seized, social and sexual liberation in 1970, I was an intense 15-year-old high-school girl in suburban Pittsburgh. Feminism hit me hard and it formed me. I entered young womanhood with the lovely delusion that life would deliver every achievement and pleasure I sought.

Five years later, having already burned through two university dance programs, I haughtily informed my bewildered parents that a college degree in dance was a waste of paper. New York beckoned. Nothing would derail me, neither my parent’s copious disapproval nor that of the head of the University of Michigan dance department. I would leave college, I told them. I would turn pro. Soon I was living the bohemian life in the East Village, studying with the greats by day and waiting tables by night.

In the Amazon atmosphere of the seventies it made perfect sense that two strong woman — Twyla Tharp, a bossy broad with a cool bobbed hairdo, and Laura Dean, a wild-eyed mystic who oozed kooky spirituality — were modern dance superstars.

Because dance was our art form. At its roots were Isadora, Miss Ruth, Graham, and Humphrey. Women ran the show; she-dancers spawned he-dancers like Limon, Taylor, Ailey and Cunningham.

Women easily assumed roles of authority: running schools and companies, doling out wisdom, spurning incessant adulation. They were the art form’s free spirits and visionaries. Nothing in this scenario struck me as unnatural. Twyla and Laura Dean were but two exemplars of the zeitgeist.

In 1975, the year I arrived in New York, Twyla Tharp choreographed her breakthrough contemporary work, “Sue’s Leg.”  Thirty-four years later, this past weekend, ballet troupe Aspen Santa Fe Ballet performed “Sue’s Leg” along with Laura Dean’s “Night” (made for the Joffrey Ballet in 1980) at the Durham Performing Arts Center. 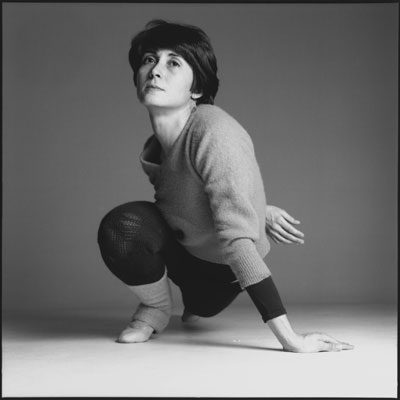 In “Sue’s Leg,” two girls and two boys (no real couples) boogie to the exuberant recordings of jazz pianist Fats Waller. Well-pointed feet and sharp balletic legs keep the gang in constant motion. Their wet-noodle torsos comically slink, slouch, and squiggle. In the course of bumbling around amiably, they collapse on each other like limp puppets.

When “Sue’s Leg” premiered in New York, the dancers in the audience gawked – our shock and envy palpable. Twyla was doing what we did — only we did it alone, at night, in our bedroom, or in filthy rented dance studios . . . or in our dreams. Set to old-tyme music (also a first), “Sue’s Leg” seemed like a glorious error; a curtain wrongly raised on a funky private rehearsal. And now that rough-hewn stuff was sanctioned as real concert dance.

Although one of the best dancers in New York, Tharp cast her gaze down while performing, indifferent to the audience’s hungry eyes. Yet this obvious exhibitionist knew she commanded attention.

What power. Why her? Why not me?

Blocks to the south, at a SoHo address so cool I would never enter it, Laura Dean reigned as the queen of loft-dance minimalism. Dean and her tribe of vestal virgins stomped unpolished wood floors to Steve Reich’s trance-inducing tunes. After de rigeur throwaway marching steps, the virgins got down to business. They began to rotate slowly. Soon they were spinning like banshees: white pajama trousers flapping, eyes flashing weirdness, untied hair airborne.

Another round of prickling hot envy? Not exactly. Dean sparked my deepest insecurities. We didn’t even occupy the same universe. She was pure, firey, intense. Even more intense than me. Where did she come from? India? Who told her to spin? No one spun in Pittsburgh. I was 21 years old. What would become of me?

Awash in these memories I viewed the Tharp and Dean reconstructions while attending the NEA Dance Criticism Institute at Duke University. The results were so-so.

“Sue’s Leg” gave the lie to the notion that ballet dancers can do all that modern dancers could. Aspen-Santa Fe’s dancers lost Tharp’s vital tone – the cheeky, nutty, irreverant Twyla. A fleshiness and a weight had gone missing. Laura Dean fared better in the nostalgic Magical Mystery Tour. The ballet dancers attacked her obsessive dance patterns with a vengeance. It was kill or be killed, and Aspen Santa Fe refused to let Dean’s pattern-driven choreography do them in. They prevailed. Bravo.

So what did become of me? In 1983, I stopped dancing and moved to Hong Kong armed with a bachelor’s degree not in dance but in Chinese. There I launched an even crazier second career in international corporate banking. Not only did my personal world change, but the big world changed as well. Money became all powerful during that decade. The dance boom of my youth went bust.

And strong women ceased to dominate the profession. In confusion, dismay, and disappointment, I watched as men grabbed the reins of this once beautiful female-dominated field.

As a devotee of the Cunningham school, I was never a Tharp nor a Dean acolyte, although I did perform in the troupe of one of Laura Dean’s first spinning ladies. But the influence of two strong women reverberated in the soul of this barefoot-hopeful. They spurred me on, kept me going. They gave me hope and showed the way.