Getting back to where we once belonged: Karole Armitage at New York Live Arts 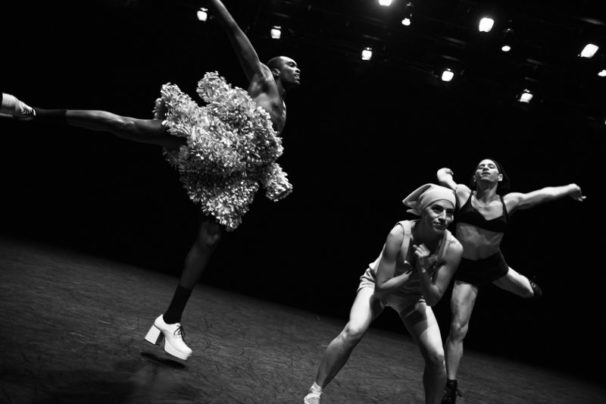 When I perused a press release of the program choreographer Karole Armitage and her performance troupe, Armitage Gone! Dance, intend to present at New York Live Arts in March, it stunned me. She’s calling the evening of dances “A Pandemic Notebook.” But no one seems to have informed the now 60-something dance adventuress (yes, the “punk ballerina”) that there’s a plague in the land. She doesn’t seem to have suffered the attention deficit disorder that has blighted the output of many in the past two years. This artist has been busy!

The photos above show her dancers on the catwalk — or are they are doing the boogaloo? Dressed in the designer Marc Jacob’s Fall ‘21 collection, they move to the sound of Native American saxophonist and composer Jim Pepper’s Goin’ Down to Muskogee.

I am most curious to see what Armitage will do with the subject of The Former Guy, whose presidency she portends to wrap into a diptych of dances, Beautiful Monster and Louis. Is it possible that, by use of dance, she can vanquish him? (No one, and nothing else, can.) Inspired by a Luchino Visconti film La Strega Bruciata Viva (The Witch Burned Alive) and Roberto Rossellini’s La prise de pouvoir par Louis XIV (The Taking of Power by Louis XIV), as well as Trump’s presidency, the two works look at how celebrity and fashion can distract from the manipulation of power. Michael Gordon, Jean-Baptiste Lully, Thomas Adès, and David T. Little provide the music.

Inspired by punk, African aesthetics, and commedia dell’arte, as well as fashion and popular dance forms, Armitage also finds ideas in science. She manifests her vision in dance “dreamscapes” that take the viewer on a poetic journey to evoke mysterious landscapes of reverie, dream, and altered consciousness. That sounds very cool, and I’d love to see it.

The genre-mixing choreographer/creator, whose body speaks fluent Balanchine and Cunningham, is an exceptionally accomplished woman of dance. Her client list ranges from Madonna and Michael Jackson, Merchant Ivory Productions, Cirque du Soleil, to Marc Jacobs. In the 1980s she worked in Europe, directing major companies, Ballet of Florence; Venice Biennale of Contemporary Dance; and, as resident choreographer for the Ballet de Lorraine in Nancy, Frances. She has directed operas and created new dance productions for major houses in the US and Europe, from the Paris Opera Ballet to Teatro di San Carlo in Naples, the Boston Ballet to the Boston Opera.