After immensely enjoying the Nora Ephron film, “Julie and Julia,” I remembered that decades ago my father, Mike Levine, interviewed Julia Child on his talk show on KDKA, Pittsburgh’s 50,000-watt AM radio station.

My dad, who during the “Madmen” era looked, dressed, and smoked like Don Draper, interviewed everyone — from his days as a daily newspaper journo at the Hearst-owned Pittsburgh Sun-Telegraph through being an intrepid on-the-scene radio news reporter starting in the late 1950s. 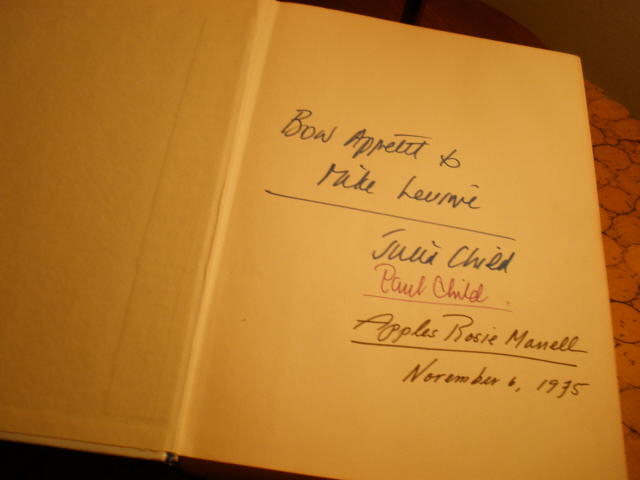 1966 saw the launch of his program “Contact,” one of the first radio talk shows in the country. He had a later version called “Open Mike” in the 1970s.

Sure enough, searching on my shelf, tucked among other much-unused cookbooks, I found my copy of “Julia Child’s Kitchen” inscribed with a nice autograph to my father.

Signing the book along with Julia Child was her husband Paul and their cookbook collaborator Rosie Manell.  (click on photo)

What is particularly touching in this discovery for me is the date of the signature, November 6. That was my father’s birthday. In 1975 he would have turned 52 years old, befuddlingly close to my own age today.

4 thoughts on “Mike and Julia”