There have been frightening happenings at the film world’s Halloween Headquarters, also known as the Academy of Motion Picture Arts and Sciences — and they’re still going on. “A Monstrous Centennial,” the Academy’s month-long celebration of the 100th anniversary of Universal Pictures, screening 13 classic horror classics, has reach mid-point. The series is augmented by a fabulous lobby display at the Academy’s Wilshire Boulevard facility, including monster-movie paraphernalia, posters, still and production photos, and lobby cards.

First up in our photos: A charming shot of Academy of Motion Picture Arts & Sciences President Howard Koch (aka “Hawk,” who just in August assumed the post) in the company of the actress Carla Laemmle, who will turn 104 years old in just two days. She’s the surviving niece of Universal Pictures founder Carl Laemmle. A delighted audience enjoyed seeing Carla play a small speaking role in “Dracula” (1931). 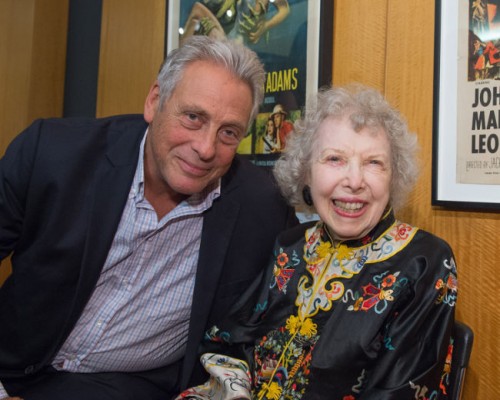 Randy Haberkamp, Managing Director, Programming, Education and Preservation, who curated the impressive program together with NBC/Universal said,”Horror films today are all blood and gore, but in their generation, they were about unrequited love. The classic horror genre has underlying emotion beyond the shock.”

Says Jeff Pirtle, NBC/Universal’s Director of Archives and Collections who oversaw restoration of the 13 titles in the series: “What the monsters want is to be loved, a universal theme (no pun intended!) that all people feel. I think the genre defines Universal. In the early 1930s, they saw this basic human emotion that people needed. We wish to share the horror films with a new generation of audience.”

Still to come in “A Monstrous Celebration”: a cool schedule that stretches till All Hallow’s Eve. What a great resource! It’s cheap, it’s fun, just go~!