Sleaze as art: ‘Camera Night at the Ivar’ @ Drkrm Gallery 5 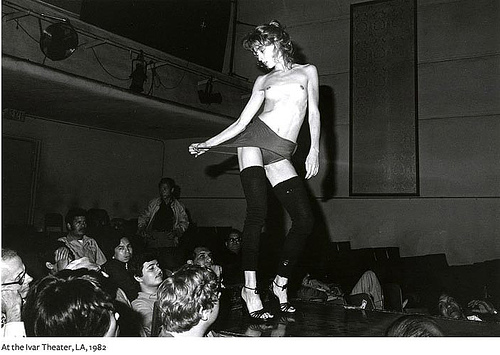 PausePlayPlayPrev|Next
Hollywood’s Ivar Theatre — notorious, low-life, sleazy — presented crude peep shows, images of which I have interspersed in the slide show with ballet photography by renowned dance photog, Gene Schiavione. The images all feature the female body on explicit display. The Ivar strippers, and the men who clustered at the Hollywood theater to photograph them on “Camera Night,” are the subject of a gallery exhibit opening this weekend.

The Ivar nudie parades were a big draw for the lurid school of L.A.-noir photography. Gallerist John Matkowsky’s drkrm gallery exhibit includes prints by Bill Dane, Paul McDonough, Anthony Friedkin, as well as Garry Winogrand, the latter whose Ivar portraits have hung in the Metropolitan Museum of Art.

The Ivar opened as a legitimate theater in 1951; it later became a rock club. In 1966 The Grateful Dead droned into the night there. Lennie Bruce worked the hallowed hall — not surprising. By the late ’60s it descended into a full-nudity strip joint — one of the last standing burlesque houses in the U.S. Stuck smack in central Hollywood it was an eyesore into the backyard of Paramount, Goldwyn and the former Columbia studios, where the girls hawking their wares were considered nice. A last bastion of the desperate female, a twenty-minute tour of the Ivar’s sordid stage was a quick route to copping money for dope. Cleaner than hooking, it fetched less than $10 in the late ’70s, according to Matkowsky.

So what’s the difference between the “Camera Night” photos and those of Schiavione? Ballerinas parade their bodies before audiences — but the intent and context differ. To my eye, the Ivar material, because it ropes in not just the performers but the audience as well, operates at a higher plane. The ballet photos, devoid of context, represent a purer objectification of the female body. For a pure exploitation I’d point to the ballet shots. But that doesn’t make the Ivar stuff easy to see.

5 thoughts on “Sleaze as art: ‘Camera Night at the Ivar’ @ Drkrm Gallery”