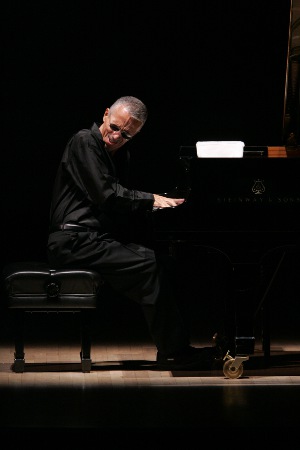 A parade of music, not quite jazz, instead, unidentified art songs, came in between. The slow-tempo’ed ruminations clustered ’round the low notes of the grey-haired pianist’s keyboard.

Feeding a rhapsodic house of worshipful fans, Jarrett, 66, offered an assortment of repertory, all digestible, ranging from 8 to 10 minutes. “This is the new, short me!” he proclaimed in one of many appealing commentaries delivered from a standing microphone ten feet from his piano.

Jarrett is a highly introspective performer. First hunching over the keyboard, then weirdly (and wonderfully) rising to stand while playing, he noodled, extracting harmonies. The slender pianist at times wrenched away from the keyboard, twisting his torso and turning his face to the house. Sometimes he wailed with his voice.

Even boogie woogie, even walking blues, all that he touched was shapely and controlled. There was a sameness, at worst, but the evening came to a crescendo during three encores.

Having been roundly warned by a stern voice on the p.a. system against talking, photo-taking, cellphone ringing, or the worst of all, god forbid, coughing, the muzzled audience nonetheless gamely drank it in. They seemed awestruck. In the end, they loudly demanded not one, not two, but three encores from Jarrett who charmingly offered the Arlen ditty as his farewell. The love connection between artist and audience was thus sealed.

Along with his rapturous playing, Jarrett rapped. Getting the thumbs down was Kenny G; but saxophonist Albert Ayler got a thumbs up. Jarrett admitted to having been self indulgent in his salad days. Apropos his new-found musical brevity, he said, “When it’s over, it’s over!”