Since we launched arts·meme nearly four years ago, we have enjoyed the privilege of sharing with our readers several photos of early Hollywood from the collection of film historian, Marc Wanamaker.

Marc has shared unstintingly from his Bison Archives collection, letting us eyeball wonderful images of:

What we did not know was that beyond the marvelous material Marc gave his permission to publish here, he was hoarding 70,000+ others, the purchase of which the Academy of Motion Picture Arts & Sciences today announced. The collection is headed for long-term archiving at the Academy’s superb public-access facility in Beverly Hills, the Margaret Herrick Library. 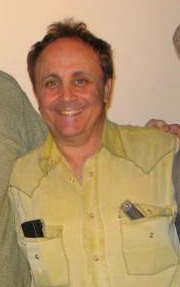 Marc, you were holding out on us. This means we could have had 69,995 more blog posts!

According to the Academy, the images document nearly every facet of film production between 1909 and the present day, focusing on the first half of the 20th century. Many of these images are the only known photographs of their subjects, including a group of eight behind-the-scenes color images of the filming of the opening sequence of Orson Welles’s 1958 noir classic, “Touch of Evil.”

The collection features rare images from more than 100 major and independent studios, many of which ceased to exist past the 1920s, including Biograph, Edison, E & R Jungle Film Co., Essanay and Vitagraph.

“I felt very strongly that the collection should be with the Academy,” said Cecilia DeMille Presley, who helped the Academy acquire the Bison photographs on behalf of the Cecil B. DeMille Foundation.

Wanamaker began amassing the collection in 1971, as he was researching a book on the history of the American motion picture studios. Over the years, the collection has been used by authors, historians and filmmakers from all over the world for hundreds of books, films, lectures, exhibitions, publications and other scholarly works. “The Herrick is one of the premier archives in the world,” said Wanamaker. “It is appropriate that much of my life’s work will have a permanent home there, including a photo album compiled by Ralph DeLacy, D.W. Griffith’s property master for “Intolerance.”

It is with great joy that we congratulate Marc and his patron for the purchase, Cecilia DeMille Presley, granddaughter to one of the founders of the Academy — a magnificent addition to the recorded visual history of Los Angeles!