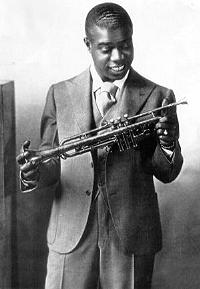 This nattily dressed young man is Louis Armstrong, age 30. The photo was taken in 1931, the same year in which Armstrong made his groundbreaking recording of Hoagy Carmichael’s plaintive “Stardust.”

Armstrong was by then an experienced Chicago musician, and the top gun on his instrument. “Stardust,” written in 1929, was just two years old, with Mitchell Parish contributing lyrics only after it had been published as a lyric-less instrumental.

Arts journalist Terry Teachout in his 2009 biography of Armstrong. “Pops” writes about the recording.

It was my pleasure over the holidays to interview Terry and to contemplate Armstrong’s art. My article was published in Pasatiempo, the arts and culture magazine of the Santa Fe New Mexican. Please enjoy it, as I so enjoyed writing it!

After laying down an opening cadenza, Louis Armstrong bleats 20 notes of Hoagy Carmichael’s luminous “Stardust” into a Chicago recording-studio microphone. It’s Nov. 4, 1931, roughly one decade into the life-long music career that qualifies Armstrong as one of the most gifted and influential performing artists our country has produced.

Terry Teachout, author of the highly praised 2009 Armstrong biography, Pops: A Life of Louis Armstrong (Houghton Mifflin Harcourt Publishing) calls this recording “the most radically innovative and original jazz vocal recorded in the 1930s. If you could preserve only one record to let people know what Louis Armstrong was about, “Stardust”would be it,” he said in a phone interview.

The 30-year-old jazz sensation slices into Carmichael’s plaintive tune with startling ease. A 10-piece orchestra churns locomotive rhythm as Armstrong’s golden-toned, no-nonsense solo trumpet vanquishes every trace of “Stardust’s” sentimentality. Swapping his primary instrument, horn, for a secondary one, voice, Armstrong transports the moment, eschewing the melody of the song and resting instead on one note, a D-flat. He toots the song’s Mitchell Parish lyric the way a trumpet spurts air: “Sometimes I wonder why I spend such lonely nights [moaning to himself, ohhh baby lonely nights].”

Armstrong’s rasping voice then scales the song’s great emotional ladder (“each kiss an inspiration”) and finally descends into nonsensical sound nuggets — scat singing, only one of Satchmo’s great jazz trademarks.

Teachout, drama critic for The Wall Street Journal and one-time professional jazz musician, explained: “At that time, you never heard a singer break away from the melody. He compresses, simplifies, and paraphrases the lyric. By the end of the song, he is free associating.”

Audiences may remember Teachout as the librettist of “The Letter,” the W. Somerset Maugham-inspired “opera noir” written with composer Paul Moravec that had its premiere at the Santa Fe Opera last summer. His book, “Pops,” swells with praise for the hardworking musician’s “lustrous tone and unerring swing”; his “ability to use the upper register of the trumpet to expressive effect”; his noodling solos that reach a “realm of abstract lyricism that transcend ordinary human emotion”; and his “steel-wool voice,” pitch-perfect even while dishing out endearing side commentaries.

Teachout recounts the life of an American artist who found authentic self-expression and cold cash in the marketplace. Armstrong led bands, performing nearly nightly in dives and in concert halls. He recorded iconic masterworks including “Potato Head Blues” (1927), which Teachout calls “one of the greatest solo recordings by a jazzman, a landmark of modern music,” and “West End Blues” (1928), one of his most celebrated recordings, whose opening triplet arpeggios to a fiery high C that Teachout identifies as “the most technically demanding passage to have been recorded by a jazz trumpeter up to that time.” It “catapulted his fellow jazzmen into a musical world in which even the simplest of phrases were charged with an irresistible forward thrust.”

The son of a dirt-poor New Orleans prostitute, Armstrong would eventually enrich Chicago and Harlem nightclub owners, Hollywood movie producers, Manhattan television executives, sundry booking agents, managers (two, but the most important was Joe Glaser), and, modestly, himself. Audiences flocked to see him in Chicago, New York, London, Tokyo, and Paris. He was adulated in Africa and played SRO in Las Vegas.

He was an unrepentant audience pleaser, a great entertainer who had chops, rapture, and drive. And a thick skin.

Armstrong described his life as “all happiness” (adding, “I love everybody”), but he had an incredibly compromised childhood as a fatherless street kid in the Storyville district of New Orleans.

Teachout tours the well-trod Armstrong narratives, like his period of internment in a foster home where a photograph shows him as the somber coronet-toting member of the Colored Waif’s Home Brass Band. He apprenticed with Joe “King” Oliver’s band and ascended rapidly through Chicago’s gangster-ridden musical scene. There he played his most his most adventurous licks with his Hot Five and Hot Seven ensembles. (Jazz was hot then; it cooled down only later.) A broad swath of big bands marked the ’30s and ’40s for Armstrong, to the dismay of jazz purists as his repertoire morphed from hard-core New Orleans experimentation into standards, ballads, and danceable stuff.

In the late ’40s, he formed Louis Armstrong and His All Stars, whose ever-changing personnel shared the joy Armstrong spread worldwide to millions until his death in 1971.

Armstrong’s life began under the most heinous form of racial segregation; it spanned the civil-rights movement. On the professional plane, he witnessed, while not always adopting, vast developments in an art form he himself pioneered. As the brash innovator grew artistically stolid in his middle years, Americans began to underappreciate him. Protective of his subject, Teachout suggests that Satchmo was overexposed: his growling voice was ubiquitous on early radio; a natural actor, he appeared in several movies, including The Glenn Miller Story, High Society, The Five Pennies, and Hello, Dolly!; and from the ’50s onward he was a mainstay on television variety shows such as The Bell Telephone Hour, The Dean Martin Show, and The Ed Sullivan Show.

A snobbish cultural vanguard, writes Teachout, sneered at Satchmo’s baroque vaudevillian persona and his instinct to entertain — and further, to please. Most painfully, his musical offspring, Dizzy Gillespie and Miles Davis, came to see in Pops the unbearable manifestation of all the wrongs done to black men in American society. He was a lightening rod in a transitional time in American culture, and although Armstrong was a scarred veteran of racial politics (abundantly clear in the diaries and audiotapes on which Teachout bases his research) in performance, he maintained his jovial personality.

Teachout reminds readers that, as a black man born in the New Orleans of 1901, Armstrong inhabited a different world. “My book is just another step in an ongoing process that began with the conversion of Wynton Marsalis, who now places Armstrong at the center of his personal pantheon,” he said. The Ken Burns jazz documentary [for PBS] too, set in motion a ground shift in critical opinion about Armstrong. Essentially, my book brings these threads together into a unified narrative of Armstrong’s life that tries to get him right.

“You can understand how difficult a place the world is without being defeated by the knowledge. That is Armstrong in a nutshell. He really didn’t have illusions about the world and particularly about how the world affected black men of his generation. I see Armstrong as a very inspiring figure,” Teachout said. “In his life and in his character, he is as inspiring a figure as we have had in the 20th century.”

Armstrong is the third artist whose biography Teachout has tackled. Following The Skeptic: A Life of H.L. Mencken (2002), he turned his attention to the brilliant choreographer and co-founder of the New York City Ballet, producing All in the Dances: A Brief Life of George Balanchine (2004). “My books are about characteristically American artists,” Teachout said. “I see [Armstrong and Balanchine] as birds of a feather. Although each alone was very different — Balanchine, in fact, was a [Russian] immigrant — nevertheless they are central to American art in the 20th century. Both were great professionals, utterly practical people who dealt with the problem facing them, unembarrassed to present themselves as both artists and entertainers. Balanchine, who worked on Broadway and in Hollywood, was always conscious of the need to create works that made sense to his audiences. He created a wide-ranging repertory that fed his audience and its desires.

“They were also both very much in tune with themselves. They weren’t alienated from the world; they accepted the world as it was and transformed it into art. They did not struggle with their muse in the way that, say, Jerome Robbins struggled all the time, or to take an example from jazz, John Coltrane. What comes out of Armstrong is natural and in a way unmediated; it is an immediate manifestation of what is within him. And Balanchine was the same kind of artist.

“That type of artist is where my own sympathy lies. I’ve never been one to gravitate to Great Artists who are self-conscious about making art. Balanchine famously said, “My muse comes to me on union time.” And Armstrong got up every night on the nightclub stand in circumstances that were far removed from a Carnegie Hall recital. But he made art. ”

Miles Davis eventually admitted that: “You can’t play nothing on trumpet that doesn’t come from him.” And Dizzy Gillespie, who openly mocked Armstrong for years, made peace with him before his death, saying, “I began to recognize what I had considered Pops’ grinning in the face of racism as his absolute refusal to let anything, even anger about racism, steal the joy from his life. Coming from a younger generation, I misjudged him. ”