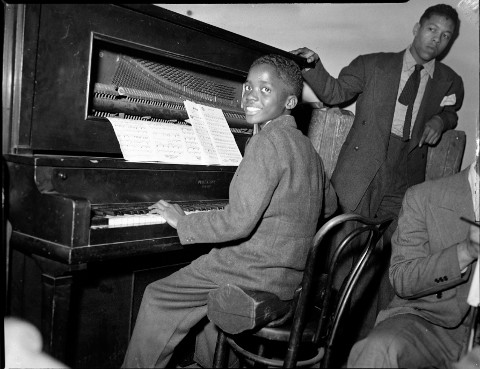 He’s propped up on a trumpet case! It’s the young Ahmad Jamal (born Frederick Russell ‘Fritz’ Jones), a Pittsburgh native whose photo by renegade photog, Charles “Teenie” Harris, is featured in an exhibit at the city’s Carnegie Museum of Art. Jamal’s is only one of 80,000 photographs Harris snapped of daily African-American life in the industrial city during the years 1935 – 1975. And it steals my heart.

I was alerted to the photo by the Los Angeles disc jockey, Tom Schnabel, the world-music expert who has regularly featured Jamal’s tuneful playing on station KCRW over the years. One week ago Saturday, I was cruising south on Wilton Avenue in Los Angeles, the full flood of afternoon sun pouring down, the air at pitch-perfect coolness, and at that very moment, Schnabel broadcast the title tune from Jamel’s latest album, “Blue Moon.”

The octogenarian pianist, many miles, many moons from his days as little Fritz Jones of Pittsburgh, cloaks the Tin Pan Alley ditty in a wall of hypnotic drumbeats that drill for a very long time. When the familiar melody finally emerges, it’s a revelation at a whole other level. It’s tremendous.

Indeed, wow. So this one’s dedicated to Tom Schnabel.