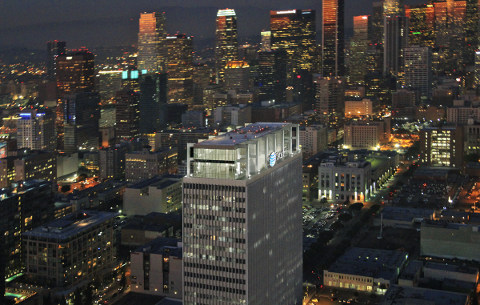 Wonderful news,  there’s a new — that is, refurbished — 500-seat auditorium for music performances downtown. It’s called AT&T Center Theatre, and it’s located in the mid-century-modern classic skyscraper designed and built in 1965 by William Pereira, the USC architecture professor and founding partner of Pereira & Luckman (designers of the LAX Theme Building, and more).

Originally commissioning the tower was Occidental Petroleum Corporation, the Los Angeles oil developer. After Oxy, the building flew the flag of TransAmerica, until the insurance/investment giant flew the coop.

Now operating out of the smart urban high-rise is KUSC, L.A.’s classical music station. In an email, the station’s program director,  Gail Eichenthal, explains the genesis of the new hall:

“The hall was built as an elegant (and ample) VIP screening room when United Artists was headquartered in the (then known as) Transamerica Building.

In the early 1980s, Sheila Tepper created the Dame Myra Hess Concerts in this hall, aired live on KUSC Wednesdays at noon. She showcased up and coming young instrumentalists. The audience consisted largely of office workers.

When Brenda Barnes [KUSC General Manager] began looking around for a better location for KUSC [better than the USC campus] in around 2009, she didn’t know about the concert broadcasts  in the 1980s. But she did think it was an extra bonus for KUSC to be housed in a building with a 500-seat auditorium.

It took me more than a year to convince the building that it would pay off to make at least minimal acoustical improvements to attract professional musical ensembles. I’m thrilled to say they ended up making a substantial investment in state-of-the-art reflector shells to bounce the sound back into the hall.  (I even dragged Disney Hall acoustician Yasu Toyota to the hall to give his opinion!!)

One comment on “New live-performance hall for music in downtown L.A.”